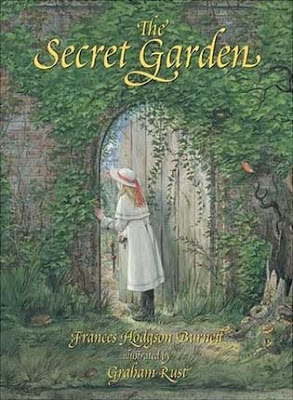 The Secret Garden by Frances Hodgson Burnett was first published in 1911 and hasn't been out-of-print since that date. Honestly though, I am not sure why.

First the story doesn't seem like anyone, anywhere could relate to it. Two very bratty, spoiled children find themselves alone with only servants to tend them. The house, with over 100 rooms, is almost completely shuttered, and yet there is next to nothing to do except play outside. When Mary, the orphaned cousin to Colin, the heir of the property, finds the key to the secret garden which was locked and forbidden for the past ten years, she finds herself growing and changing as the garden itself is coming alive in Spring. When she invites Colin to join her in the secret garden, he too is transformed from a sickly to a very healthy young boy. Okay, lovely story and delightful if one enjoys talk of flowers and growing and thinks they can trick all the adults in the world.

What bothered me about The Secret Garden and caused me to wonder why it has remained on classic book lists for children to read for over 100 years, is all the abuse and neglect in the story! Honestly, the parents in this book, both sets, are awful. Mary's mother, a socialite in India even said aloud that she wished she'd never had a child and she couldn't be bothered to care for or even notice poor Mary for one minute. When she and the father die of cholera leaving Mary alone in the world, I didn't shed one tear. Mary was raised spoiled and headstrong and alone. She didn't know how to play or make friends, only having servants to boss around. Is it any wonder that she was unhappy?

Colin's mother died at his birth and his father was so overwhelmed by grief that he neglected his son, worrying that he was sickly and also likely to die young. Colin was extremely bossy with the servants, getting his way by throwing tantrums long after they were age-appropriate. His father would leave the house and the estate in the hands of the servants and be absent for months on end, barely acknowledging his son when he did return home. His neglect and absences from home were big determinants in shaping Colin into the hypochondriac he became.

Sloane Crosley, writing for NPR, describes the book as half summer, half winter. "It is always the flowers that one notices before inspecting the dirt below." Perhaps The Secret Garden was never intended to be a children's book after all. Perhaps Burnett wrote it as a cautionary tale to parents to warn them what might happen to their children if they neglect them -- they might become brats!

Recently a friend asked me if I would recommend that she reread The Secret Garden. My answer was a resounding 'No!' There are too many wonderful books that need to be explored to waste one's time on this one.

One positive note I would be remiss not to mention -- the illustrations by Graham Rust are simply marvelous and my favorite part of the whole reading experience of this children's classic was to look very carefully at each of them. I found myself quite busy admiring the way he seemed to capture the feel of yesteryear.