Weather: This past week presented us with just about all the weather one could ever predict for a mid-spring time period: rain, wind, snow, hail, sun, mild, severe, blustery, fine. Today alone has been a testament to how weird the weather's been with my daughter waking up to snow at her home near Mt. Rainier and my sister also waking to snow in Boise. Our temperature wasn't as low today as predicted but still quite cool in the low 40 degrees Fahrenheit. Snow is predicted for some surrounding communities later tonight.

Boise: My daughter, a teacher, is on spring break this week and asked if I would travel with her and her kids to visit my sister and two of her friends in Boise, Idaho. Her husband was unable to make the trip and she needed an extra set of hands to help wrangle her boys, aged 4 1/2 and 1 1/2. So Wednesday the four of us boarded a flight together lugging two roller bags, a diaper bag, another over the shoulder bag, a child's backpack, our purses, a stroller, and two car seats. We had to stand in line behind people checking in dogs for their flights to check in the car seats, then we had a long line at security where they didn't take pity on us and made us practically unpack the diaper bag in addition to taking Jamie, the youngest, out of his stroller in addition to all the other hassles like no shoes, computer out of bag, toiletries, etc. We nearly missed our flight. We we did arrive in Boise though,  but the car seats didn't, so we had to get loaners from the airlines. No wonder my daughter needed help.

Highlights of our spring break in Boise in pictures:


Thank you Rock and Grace for hosting us for a special and memorable spring break in Boise!
Last Sunday: I didn't post on Sunday Salon last week because we were attending a second memorial service for Dom Calata, our relative who died in the line of duty as a Sheriff's deputy. This service was put on by the Washington Army National Guard where Dom was Major Calada. This was a military service and very moving with it's traditions and allowed us to learn about another aspects of Dom's amazing life. Once again we were struck by how special this man was and we want to live our lives to be more like him. RIP, Dom. We love you so much and miss you. 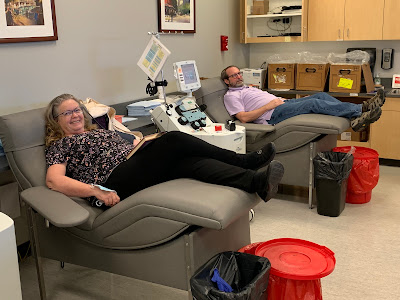 Blood donation: Don and I donated blood to honor the memory of Dom. The Edgewood Police Department put out a request for blood donations, hoping to get 50 pints.  So far they have 300+ pints and have now amended the number to 440 donations, to match his badge number.  If you want to donate you can go anywhere Bloodworks Northwest has clinics. Tell them you are doing it to honor the memory of Officer Dom Calata.

Books: I finished one book, a reread, The Silver Chair by C.S. Lewis, read for Narniathan. The week did not lend itself to reading though I did read a page here or there in several other books. 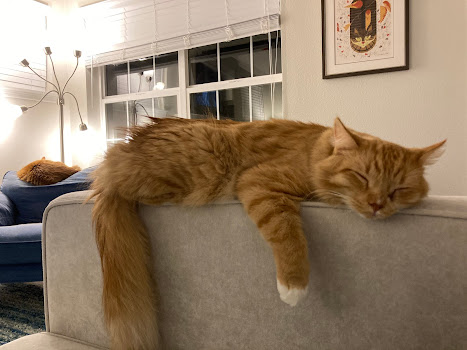 Update on George and Fred: They have completely adjusted after their move from California. This photo has George in the foreground and Fred way in the background. 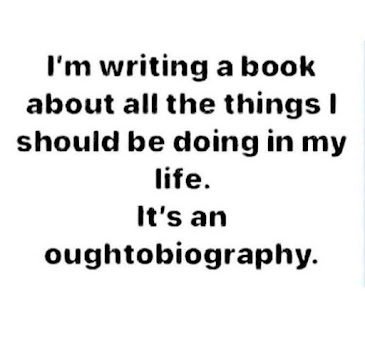 Posted by Anne@HeadFullofBooks at 7:40 PM