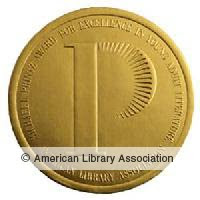 Later this week I will meet with a group of students from my school to hold our first ever Mock Printz Award Workshop. In preparation for this event we have all been busy reading books on a list of ten pre-selected by youth librarians in Clark County which were presented at the WLMA conference in Yakima this past October. Next year I hope to be able to create my own list, but with little notice I was grateful to accept the help and suggestions from librarians who have been through the process before.

To back up a bit, the Printz Award is the highest honor given to young adult literature in America. The actual Printz committee announces its selections during the Mid-Winter meeting of the American Library Association in January. My Mock Printz committee will attempt to choose the winner (and two honor books) and then we will wait with anticipation for the actual results to see if we got it right.

I am so impressed with my group of 25+ high school students who have read feverishly since I introduced this idea to them in mid-October. I asked them to make a commitment to read at least five of the books. Many students have read all ten. Several stopped by my desk today to ask if I had any of the books so they could try to cram in one more by Thursday. All this merely for the love of reading and for the satisfaction of being part of something.

Here is a list of the ten books for our Mock Printz Workshop. Several are wonderful and I would not be surprised if those are considered by the actual committee. Others aren't very good and I hope they aren't considered. I am sure we missed some great books published later in the year that the actual committee won't overlook. We'll see how we did.

Wintergirls by Laurie Halse Anderson
Marcelo in the Real World by Francisco X. Stork *
If I Stay by Gayle Forman
When You Reach Me by Rebecca Stead *
Tales from Outer Suburbia by Shaun Tan *
Liar by Justine Larbalestier
Monstrumologist by Rick Yancy *
Punkzilla by Adam Rapp
Andromeda Klein by Frank Portman *
Distant Waves: a Novel of the Titanic by Suzanne Weyn

I'll update you later this week with the results of our workshop. Stay tuned!
*= Read my blog on the starred books.
Posted by Anne@HeadFullofBooks at 6:36 PM