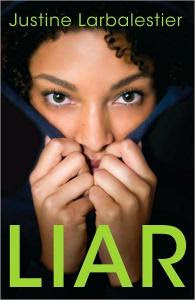 Tomorrow, at the end of its mid-winter meeting, the American Library Association announces the award books for books published in 2009. Along with many youth services librarians I am waiting with anticipation to see the list. What were the best books published for kids last year?

On the award list may be this book, Liar by Justine Larbalestier. I read it along with my Mock Printz list of books and my first impression was not favorable. I thought it was just a book taking advantage of a current genre craze. But my feelings about this book have actually improved over the weeks since I read it. First off, the book, considered a psychological thriller, is about a girl, Micah, who admits she is a liar. With each chapter as she divulges more information about herself one is never sure if she is really telling the truth this time or not. Even by the end of the book I wasn't sure if I believed her. I think that shows tremendous talent and skill on Larbalestier's part. It must have been hard to keep all the lies straight as she wrote the story.

I don't want to give away the ending, but let me say that when I finished the book I was in complete shock that none of my students had let the ending slip. None. I think I had 10-15 students who read it before me and I can't believe that any of them gave the ending away.
Read it and let me know if you think ... is Micah telling the truth at the end or not?