Tweak: Growing up on Methamphetamine by Nic Sheff 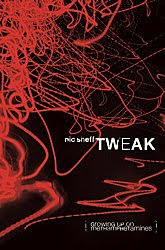 I just finished this memoir written by Nic Sheff a recovering meth addict.

The first third of the book recounts, in great detail (too much detail) Nic's relapse after a year and a half of sobriety. For a month he uses anything and everything he can get his hands on while living out of the back seat of his car or on the streets. I am usually a sucker for this type of book, but I was honestly put off by the graphic details. No, I didn't need to know how to shoot heroin into the body or how to dig around searching for a collapsed vein. TMI.

The second third of the book recounts his sobriety after his binge. I was genuinely touched by this section, by his honesty and his soul searching. Until his relationship with Zelda started. At this point I once again felt like I was given too much information or the information I was given was too graphic.

The most helpful part of the book was the part he wrote about his experiences in treatment in Arizona where he actually starts understanding the concept of his need to love and accept himself. I was pretty fascinated by some of the therapy methods that they used which seemed to make a substantial impact on this treatment.

One thing I can say is that Nic is a great writer. He has a gift for making his words convey feelings-perhaps that is why I reacted so strongly against all of the gory details, because I was really feeling them.

"Honestly, I'm not sure how much longer I can keep doing this. It's like there are seven candles lit in my stomach. One, two, three, four, five, six, seven. Seven candles burning and smoking-lit-seven flames of doubt, fear, sorrow, pain, waste, hopelessness, despair. They turn my insides black with soot and ash. There is something at the back of my eyes-a pressure building, building, building-hot like the flames of seven candles, which no amount of breath can extinguish...The fire eats away my flesh. The fire spreads. The fires runs through my veins. The fire courses beneath muscles-my tendons-the marrow of my bones. I sit rocking on the street corner. No, I can't keep doing this. I just can't." p.109

"The emptiness in my stomach-the well digging down-the nausea-the aching won't leave me. It's profound-consuming. I feel like curling up, serpentine on the floor, crying. I need a thousand pounds of heroin. I need to drown myself in methamphetamine. I need pills, weed, vials of liquid acid. Or maybe-maybe-I just need to get sober." p.116

"I thought the belief in God was totally backward, delusional, and ignorant. Spencer would talk to me about prayer and meditation, but I basically avoided ever experimenting with it. I just couldn't believe, there was no way...Tonight I pray. Maybe it isn't the first time, but it is the first time I pray with sincerity. I am desperate. And so I cry and ask God for help." p. 126

Note: Nic's father wrote a book about his experience with Nic's addiction from a parent's point-of-view in another well-written book, Beautiful Boy, by David Sheff.

For Older teens to adults; 3.5 stars out of 5.
Posted by Anne@HeadFullofBooks at 2:08 PM