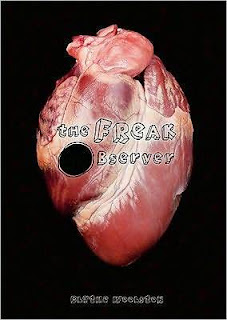 I love it when an author uses a theme around which they build the plot of a book.  That is what Blythe Woolston has done with The Freak Observer. The central theme is physics and she adeptly brings it into the story in ingenious ways that are both surprising and satisfying.  Now before you stop reading because you think to yourself I don't know anything about physics, let me say the book isn't about physics it just uses some of its theories and terms. In fact, the heading of the first chapter is a question on classical lessons on pressure and force that the main character, Loa, presumably saw on her physics test. Clever hook!

Loa has missed a lot of school because grief over the death of her sister several months earlier and the recent death of a friend Esther. Her Physics teacher gives her an extra credit assignment to explain what a Freak Observer is in physics. She discovers that it is a hypothesized self-aware entity that pops into existence in its universe, also known as the Bolzmann brain. In a lot of ways Loa is the freak observer in her own life. She observes how the death of her sister and her friend affect others and herself.

I really, really liked this book, which won the William C. Morris Debut Author Award last year.  At times I felt like I was reading music or being swept into the stratosphere by the prose.  Other times I was overwhelmed by the grief and isolation that Loa was experiencing like the time she trips up the stairway at school and spills her books everywhere.  No one stops to help or even acts as if they notice her.  She feels invisible, the grieving girl that might be contagious if one acknowledges her.

The only thing I don't like about the book is the cover.  The picture of the human heart is very off-putting.  I understand why they selected it as it relates to an event in the first chapter but it is just too creepy looking and not really relevant to the whole story. (Are you paying attention publishers?) A better picture would show an old fashioned orrery.


My family used to work like an orrery. We would have got a prize in a science fair, our gears turned so smoothly and all the parts fit together perfectly. Asta was in the middle, where the sun ought to be. The rest of us kept to our orbits. --p. 53