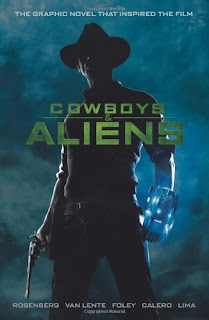 Last week When I went to see the movie Cowboys and Aliens my husband mentioned that it was originally a Graphic Novel by the same name.  I decided to look for it at the Borders Books close-out sale and found it. The whole book took me less than an hour to read and it does have the outline of the movie within it but I actually was amazed what the producer was able to get out of Rosenburg's original comics.Perhaps I should read the original rather than the mash-up book. Either way, the book is fun and so is the movie.


The ultimate showdown between Cowboys and Indians is interrupted...by an alien invasion. The Old West will never be the same. When an extra-terrestrial armada lands in the Wild West, they find themselves in a showdown with one tough posse of rough-and-ready heroes—and the Cowboys and Aliens graphic novel gives you the thrilling comic book stories that started it all off! Compiling every issue of Scott Mitchell Rosenberg’s electrifying comic book series, this gorgeous, full-color graphic novel features the dynamic creative talents of Fred Van Lente, Andrew Foley, and Luciano Lima. ---Goodreads.