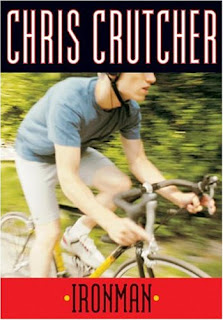 I LOVE CHRIS CRUTCHER! Well, I actually don't know Chris Crutcher but I do love his books, every single one I have read. This book is no exception. It is fantastic, not to be missed.
Ironman is the story of a boy, Bo Brewster, who is locked in a power-struggle with his father. He also ends up in an anger management group following angry outbursts at school related to quitting the football team. There he meets a bunch of kids who have serious anger issues, also. All the while he is training as hard as he can to participate in an iron-man competition (swimming, biking, running.)
In addition to being an author, Chris Crutcher is a Child and Family Therapist. He also spent nearly a decade working in an Alternative School in Oakland. Because of these experiences his books seem to be very authentic and realistic. Crutcher gets it that all kids don't come from healthy homes. He gets it that sometimes teens have to deal with parents who are abusive, addicted, or absent.  He understands that teens may have to be the financially responsible people in their families or the consistent care-givers to younger siblings. Yet, all of his books have some adult who understands kids and can help guide positive decisions. You might think that the books all sound too serious, but actually there are really funny scenes, too.


...Mr. Redmond is seeming more and more like a cartoon character to me, and rather than getting angry at him, I'm starting to get embarrassed for him. It has taken a long time for me to understand Mr. Nak's notion that my anger is a cover for fear, and only when I admit to that fear will I get control of my anger, or in fact have no need for it. I'm coming to understand when Redmond or my dad pushes me, and if I can acknowledge it, there's no need to cover it. Believe me, that's a lot easier said than done, because it's a natural, unthinking thing to haul out your rage in a flash so no one sees how scared you are. But understanding that-- truly understanding it-- is like being handed a secret of the universe, because people look different to me then. ---p.220

Ironman was published in 1995 so I was worried that it would be outdated, but the story seemed very current and relevant, aside from a few comments about listening to a Walkman.  Ha!  I hope that you give Ironman or any of his other books a try.  I such a big fan that I am going to start a Chris Crutcher Challenge to encourage myself and everyone who participates to read all his books.  Check out the Chris Crutcher challenge here.

Posted by Anne@HeadFullofBooks at 10:35 PM