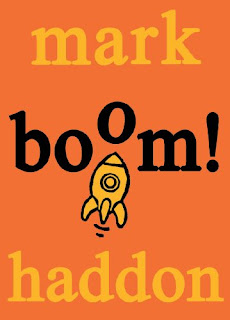 Fans of Mark Haddon, author of The Curious Incident of the Dog in the Night-time, will be thrilled to know that Haddon has out another wonderful book, though this one has a target audience of middle-grade kids.

Here's the summarary from the back of book:


From the moment that Jim and his best friend, Charlie, bug the staff room and overhear two of their teachers speaking to each other in a secret language, they know there's an adventure on its way. But what does "spudvetch" actually mean, and why do Mr. Kidd's eyes flicker with fluorescent blue light when Charlie says it to him? Perhaps Kidd and Pearce are bank robbers talking in code. Perhaps they're spies. Perhaps they are aliens. Whatever it is, Jimbo and Charlie are determined to find out. There really is an adventure on its way.

My family and I listened to this short book in two days of short trips around Washington. It was read by Julian Rhind-Tutt who does a marvelous job especially with the alien-speak parts.  It is really funny.  I commented to my daughter that she should consider this book for a class read-aloud if she gets an upper elementary position this year and she commented that she'd be afraid that she couldn't read out the alien bits. I told her it wouldn't matter since they are nonsense words anyway.  Just make something up! I really recommend that you listen to the audio version if you have a chance. It is a hoot.

I decided to order this book for my high school library, even though the targeted audience is younger than high school aged kids, because it is such a fun book.  I think I should be able to get it into the hands of reluctant readers, especially boys. The nice thing about the way that Haddon wrote the book is that one is never quite sure how old the main two characters are, I'd say somewhere between 11 and 14. By being ambiguous about the ages, high school students won't be put-off reading a book about kids much younger than themselves.

Thanks to Sue Jackson at Great Books to Kids and Teens for recommending this book to me.