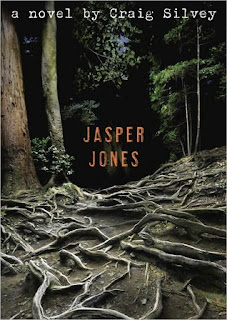 Where do I begin?

First, Jasper Jones by Craig Silvey is one fantastic book...one of those books that has won a ton of awards and deserves to win more.  I mean it, this book is GOOD.

Secondly, the book is multidimensional. In an interview, Silvey sums up the novel as “a coming-of-age, regional mystery novel, stuffed inside a nervous little love story, garnished with family drama and adolescent escapism and anguish.”---Suite 101

The narrator of the novel is Charlie Bucktin, a thirteen-year old boy that lives in a small mining town in Australia in the 1960s. One night Jasper Jones, the local troublemaker, comes to Charlie's window and asks for his help. Out of admiration and fear Charlie goes with Jasper to a secret location and makes a gruesome discovery. Now Charlie is consumed with guilt at keeping this huge secret that has the whole town shook up. But while the mystery plays out, Charlie and his friend, Jeffrey Lu, a Vietnamese refugee, go about their friendship doing things like debating who is a better super hero, Batman or Superman, and goofing around like young teen boys can.

Charlie, who wants to be a writer someday, is also a voracious reader and he makes lots of literary references to his favorite authors: Twain, Harper Lee, Capote, and Kesey. In fact, some reviewers say that they think this book is the Australian version of To Kill a Mockingbird. Could Charlie's dad be Atticus Finch and the old recluse, Jack Lionel, really be the Bo Radley character?  I guess so.  It works. I really enjoyed the way that Charlie, as narrator, wove the ideas and thoughts of authors into the fabric of his life as he did with Mark Twain here:


Mark Twain might well have an opinion on everything. He might have been bestowed with wit I don't have and blessed with phrases I can't summon. He might write with the air of knowledge earned, he might invoke laughter and sadness or anger with herds of words. He might beguile and illuminate, frustrate and affect. He might gift you whole worlds to walk in, wide eyes to see through. But not even Mark Twain could describe just how soft a girl's lips are when they are pressed against your own. ---p.191

The novel Jasper Jones really does seem to have it all. It is has a coming-of-age tale that is both achingly real and hilariously funny at the same time. It has an intriguing mystery with a very sinister underbelly. The sweet romance that develops is both appropriate and awkward as one would expect from a thirteen-year-old and his love interest. There is friendship and loyalty, with the dialogue between Jeffrey and Charlie being the highlight of the book. Set during the same time period as the Vietnam conflict, it has the feel of historical fiction. It also has sports, but, unfortunately for me, I know nothing about Cricket though I did enjoy the description of the action (even if I had no clue what was happening.) And, as I said before, there were lots of literary allusions and references.

If there is one criticism I have, it is with the American publisher, Knopf Books for Young Readers/Random House, who decided that this book is YA lit. I'm fairly sure, but not certain, that the Australian publisher marketed this book to adults.  Even though the story is about teenagers doesn't automatically make it a teen book (think Elegance of the Hedgehog or Sweetness at the Bottom of the Pie for examples of adult books with children/teen protagonists.) Though there is a lot on the story that teens will relate to, I think that the book itself may be a bit dense for the average teenager. That said, I do hope that teens like it and that Jasper Jones gets the attention that I think it deserves from the American Book Award committees: National Book Award and/or Michael Printz Award for excellence in YA Lit.  I just ordered a copy for my library and I hope to get it in to the right hands as soon as school starts in September.

By the way, just in case you were wondering, Batman is the bravest superhero. Read the book and find out why!

Posted by Anne@HeadFullofBooks at 12:36 PM