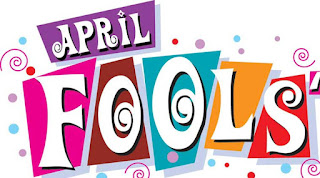 Today is April 1st also known as April Fools' Day. When I was teaching the day could not go by without someone pulling a joke on me or vice versa. One of my last years as a secondary educator, the students arrived at the school early and blocked all the stairways with balloons. It was a fantastic joke, to my way of thinking. Since no one has pulled any jokes on me today and there is no one here for me to fool, I have spent the day thinking back on past April Fools' jokes. As my brain has meandered down memory lane of course I had to recall the best April Fools' Day ever.

The year was 1972 or '73. Our mom worked part-time and would usually get home around 5:15 PM. Dad usually didn't come home until right before dinner at 6:00 PM. With this in mind my siblings and I decided to completely booby-trap the house before they got home. We all raced home from school in order to execute our plan. Nothing we did was malicious or harmful, everything was relatively simple and easy to undo.

When Mom got home, she saw a note on the front door "Use the back door, please." She dutifully walked to the back on the house to enter by the sliding glass door. We greeted her by yelling, "April Fools." She laughed at herself that she was so easily fooled. She moved to the hallway closet to hang up her coat. As she opened the door, all the hats on the top shelf slid off on top of her. My brother had brilliantly booby-trapped it with a long string and some paper. The result was a mess of hats and scarfs on Mom and the floor. Once again Mom laughed as we hollered "April Fools!"

After changing out of her work clothes, Mom entered the kitchen to prepare dinner. First stop was the sink to wash her hands. But as she turned on the water she got sprayed in the face because we had taped the spray nozzle open with black electrical tape. Unbelievably Mom didn't get angry as she toweled off and we once again yelled "April Fools". As she started dinner preparations it was discovered that we had switched the silverware drawer with the junk drawer. How many times she was fooled by this prank I don't know, but she didn't immediately switch them back so it was an on-going prank, as was the spray nozzle on the sink. I'm sure she got wet at least three times before pulling off the tape. Heck, we probably pranked ourselves, too, since the kids had to set the table for dinner at our house.

Dad was home by now and you guessed it. He came in the back door. Dinner was unremarkable, at least as far as I remember, unless someone tried to salt their meat. We had switched the salt for sugar in the shaker and sugar for salt in the sugar bowl. I don't recall anyone confusing those that day, but no one switched them back that night, so the prank probably went on for days with sweet meat and salty breakfast cereal as the result.

That night we all watched TV together in the living room. A little after nine, Mom left to get ready for bed. As she left the room she gave us a general goodnight message saying she was so glad that April Fools' Day was over. A few minutes later we heard laughter from her bedroom.

We had short-sheeted her bed.

Posted by Anne@HeadFullofBooks at 7:09 PM