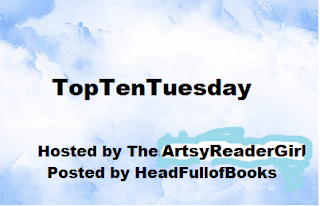 Top Ten Tuesday: I am off the board today. Instead of the given topic I am highlighting books that I've enjoyed that have an unusual narrator(s).

1. The Book Thief by Marcus Zusak---
Narrator: Death
Why it worked: The book is set in Germany during WWII. It is an appropriate narrator considering the Holocaust and the millions of lives that were lost.

2. The Magic Strings of Frankie Presto by Mitch Albom
Narrator: Music
Why it worked: Frankie Presto is a gifted musician. Music sees everything in Frankie's life according to music and musical terms. Very clever.

3. Please Ignore Vera Dietz by A.S. King
Narrator/Point of View: In addition to the main narrator, Vera Dietz, there are shifts in the point of view so the readers hear from a pagoda (yes, a building) and Charlie, the dead friend.
Why it works: Vera Dietz is experiencing an emotional crisis about the death of her friend. We gain insight into her mindset from the different narrators.

4. The Curious Incident of the Dog in the Night-time by Mark Haddon
Narrator: An autistic boy
Why it works: The reader gains understanding about autism while the mystery is uncovered.

6. The Brief Wondrous Life of Oscar Wao by Junot Diaz
Omniscient Narrator:  Sounds like "the mystery man in my head" (Shmoop)
Why it is unusual: The author felt that there was a need for an indirect narrator. The reason it is unusual is that the narrator doesn't reveal himself until nearly the end of the book leaving the reader to wonder who is speaking the whole time. We find out it is (SPOILER) Yunior, friend of Oscar Wao, but we're still amazed at how much he knows.

7. The Murder of Roger Ackroyd by Agatha Christie
SPOILER ALERT!
Narrator: Dr. James Shepperd, called to assist Poirot solve the mystery
Why is this unusual: it ends up the narrator is the murderer. What a plot twist. 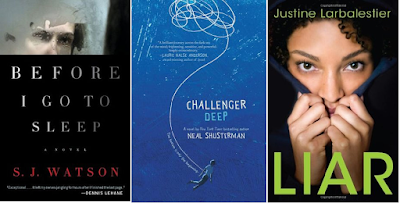 8. Before I Go to Sleep by S.J. Watson
Narrator: Christine, a woman who suffers from amnesia
Why is this unusual? Christine suffers from anterograde amnesia, which means that she forgets everything once she goes to sleep. Each morning she wakes up to a stranger in bed next to her, her husband.

9. Challenger Deep by Neal Shusterman
Narrator: Caden Bosch, a teen suffering with schizophrenia
Why is this unusual? Caden is an unreliable narrator who is living in both the present day and trapped inside his mind which manifests itself as a ship in the Marianas trench in the deepest part of the ocean. It is an eye-opening book about what it is like to live with schizophrenia.

10. Liar by Justine Larbalestier
Narrator: Micah, a compulsive liar
Why it is unusual: As the mystery unfolds the reader learns about Micah's life and history and about her boyfriend. However, at the end of each chapter we are reminded that she is a liar. It is very befuddling to read because one is never sure if what they just learned is true or not.

and the book I am reading right now...

11. Voices: The Final Hours of Joan of Arc by David Elliott
The narrator shifts with each new poem: Joan, a sword, a crown, her father, virginity, her dress... to name a few. Each is written in verse using a first-person narration. One has to check and recheck the title to be reminded who is speaking.

I was just reviewing a few of my past reviews and I stumbled upon this one and wanted to make sure that you knew about it, too.

12. Far, Far Away by Tom McNeal
Narrator: A ghost
Why this works: The ghost is Jacob Grimm who is stuck between life and death so he can recognize a good fairy tale when he sees one.

-Anne
Posted by Anne@HeadFullofBooks at 2:27 PM