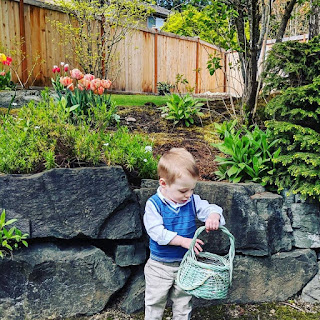 Easter: Last week we hosted dinner for a few folks, including our grandson and his cousin, both under two. Both of the little guys were so stinkin' cute. Ian had his first Easter egg hunt and he was so serious about it. We hid empty plastic eggs and he seriously collected them into his little basket, worried only if the eggs popped open or if the puppy, Bingley, grabbed one in his mouth and ran off. Ian didn't care that the eggs were empty. The hunt was the goal and we had to re-hide the eggs several times so he could find them again and again. 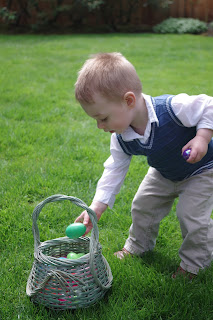 Dedicated: The week before I was in Eugene with my mom and sister. My dad was honored by the Wesley Center at UO for his past support of many, many years of this ministry by having a library room named for him. A dedication ceremony was hosted by the campus minister and his team and mom invited many friends from church or who also had connections to campus ministry. It was such fun to be involved in the ceremony and to take a stroll down memory lane as Dad's history of involvement was highlighted. His life was such a blessing to many people. 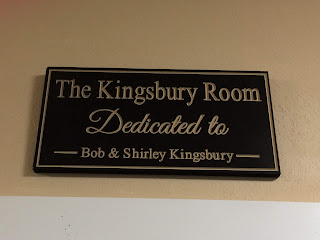 Bronchitis: On my way home from Eugene I started to feel badly and by the time I got home congestion had settled into my chest. Over the next few days it developed into a mild case of bronchitis and has now bloomed into a full sinus event. Two weeks and counting. Ugh.

Sadness in the world: The senseless attacks in Sri Lanka, the attacks on the synagogues in New Zealand and San Diego, the fires set on black churches in the South. Yesterday a Korean shop owner was killed after handing over the contents of her cash register. She lived and worked a block from our church. My heart is breaking. Such anger and sadness around the world.


Though sick, I have been reading this month, mostly as part of the 'My Own Books' Reading challenge (click on the hyperlinks for reviews, if available):

Currently reading:
San Francisco: Next week we travel to see our younger daughter who lives in San Fran. We know we'll be touring Alcatraz, seeing a Broadway show, "Charlie and the Chocolate Factory", and hope to see more sights.

Posted by Anne@HeadFullofBooks at 2:55 PM