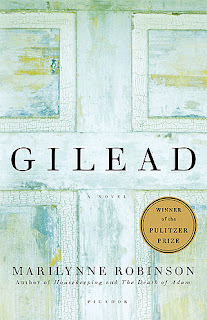 Thirteen years ago (I looked it up) a dear friend suggested to our book club that we read Gilead by Marilynne Robinson. She cited as her rationale for the choice that it was her favorite, or one of her favorite books. I got the book and made a stab at reading it but doubt that I got much more than thirty of so pages into it before abandoning it. The book was just so slow, lacked plot, was written in journal style so it had no quotation marks to indicate dialogue (a pet peeve.) I recall nothing of the book club discussion.

Several years ago I decided, after reading two fantastic books that ended up winning the Pulitzer Prize for literature, that I would go back and read several previous winners. When I perused the list I noted that Gilead had won the prize in 2005. I added it to my list of Pulitzers' to read, since I must have missed something the first time around. (Here is my personal Pulitzer Challenge list.)  Later I found a copy of it at a used bookstore and I purchased it in hopes that proximity would spur me to action.

Last month I started a reading challenge to read 'My Own Books' and Gilead was selected as one of the first ten books I hoped to read for the challenge. It has taken me thirteen years but I can finally say--- I have read it and, surprisingly, love it, too. Before I starting, I found this fantastic review written by Lee Siegel for New York Magazine. Without this review I don't think I would have understood the book or been as open to its message. I urge you to read it now or after you finish reading the drivel I write here.

Siegel begins his review with a paraphrase of a T.S. Eliot quote stating that a person can not fully understand Dante's Inferno unless they are a believing Catholic. This prepares us that Gilead will likely be a book best understood by believing Christians. The protagonist of the novel is John Ames. He is an aging Congregational minister who has been given a poor health report. He decides to write down his thoughts and prayers for his young son who is six years old, since it is unlikely he will be around to see the boy grow to manhood. In this diary/journal Ames hops around from remembrances of his youth, the history of his family which include stories of a grandfather who fought in the Civil War and was active in what is now called the Bloody Kansas battles, and moral advice he hopes his son will heed.

Robinson is unapologetic for her own faith and beliefs and readers will find in Gilead a book that reads like a meditation or a handbook on Christian thought. For an unbeliever the book will likely be plodding and plotless, for a believer, a solace and a reminder how one can grapple with their own life of faith. If there is a plot to be had it runs along two veins. The first, how will his young wife and child cope once he is gone. He loves them both so much and wishes he had many. many more years to be with them. At one point in the text he writes to his son, "I imagine your child self finding me in heaven and jumping into my arms, and there is great joy in that thought." The afterlife is never in question in Gilead.

The second plot vein runs to his conflict with his best friend's son who was named after him, John Ames Boughton, Jack for short. Jack, now a man, has come home because his father's health is also failing. His presence brings up all kinds of feelings of disgust in John Ames, the pastor, for things that Jack did long ago. When Jack seeks his namesake out for advice and confession, the elder is forced to confront old prejudices and find a way to forgiveness. This process is so redemptive, perhaps it saves both men.

Gilead spoke to my heart on many levels. How, as a Christian, can I work out my human frailties in a way that honors God and others? What kind of legacy am I leaving my daughters and grandchildren?

Because I want to remember them, I've included a few of my favorite quotes, which will also give you examples of Robinson's exemplary writing skills.


The twinkling of an eye. That is the most wonderful expression. I've thought from time to time it was the best thing in life that little incandescent you see in people then the charm of a time strokes them or the humor of it. "The light of the eyes rejoiceth the heart." That's a fact (53).

The book is full of little thoughts like this one about the twinkling of an eye. Ames wanted his son to know him at a personal level which includes things that cause him joy. Do I do the same thing for my daughters and let them in on things in which I delight?


As you read this, I hope you will understand that when I speak of the long night that preceded these days of my happiness, I do not remember grief so much as I do peace and comfort---grief, but never without comfort, loneliness, but never without peace (71).

Surely this is what is means to lean on Christ. We will experience grief and loneliness, but there will always be comfort and peace. Ah, such a hopeful claim.


Calvin says somewhere that each of us is an actor on a stage and God in the audience. That metaphor has always interested me, because it makes us artists of our behavior, and the reaction God to us might be thought of as aesthetic rather than morally judgmental in the ordinary sense (124).

This metaphor also interests me and gives me pause to think and reflect on my life and my actions.


I fell to thinking about a passage in the Institutes where it says the image of the Lord is in anyone is much more than reason enough to love him, and that the Lord stands waiting to take our enemies' sins upon Himself. So it is a rejection of the reality of grace to hold our enemy at fault (189).

Forgiveness is hard, but it helps to think of the other in light of God's love, not out own.


Augustine says the Lord loves each of us as an only child, and that has to be true. "He will wipe the tears from all faces." It takes nothing from the loveliness of the verse to say that is exactly what will be required (245-6).

Here, also, is a mystery of God. How can he love us all and give us exactly what we need? Who knows? But knowing is not required to be comforted by these words.

With the reading of Gilead I have finished my third book for the 'My Own Books' challenge and another Pulitzer Prize winner to cross off my list. The book will be donated to my church's library.

Do I recommend you read Gilead? I'll let this review speak for itself.