The Buddha In the Attic--- a reflection and review 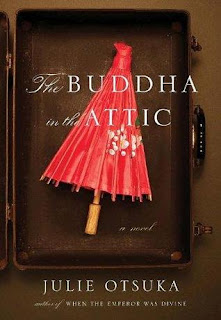 Several years ago I was asked by the sophomore English teachers to create sets of novels for their students to read in small groups that dealt with people from different cultures. I was delighted to spearhead such a project and immediately set to work reading and evaluating books for the project. Among the books selected for the regular English classes (there was a completely different set for the Honors students) was a small book called When the Emperor Was Divine by Julie Otsuka. The book tells the story of a Japanese-American mother and her two children as they are sent off to be imprisoned in an internment camp at the beginning of WWII after the Pearl Harbor attack. The book was very short and the writing extremely spare, giving very few descriptions and little dialogue. Because of this the book is almost ghostly or other-worldly.

Otsuka's second novel, The Buddha in the Attic, could almost be considered the prequel to her first book because it begins on a ship full of "picture brides" coming to America from Japan after the Great War and the book ends as internment is starting. Each of the brides had her own reason for coming, but all held a photograph of the man who would meet them at the boat and would become their husband. But unlike Otsuka's first book, which is the story of three people, this book is told by a chorus of picture brides, in a collective "we" and "our."

At first I thought the this very odd. No one had names, at least not in the beginning, and everyone was speaking. But after a time of the cadence of the prose seemed to break through and I felt like I was reading poetry. As the collective story unfolds we find women who are forced to work back-breaking jobs on farms, as maids and laundry workers, even as prostitutes. Most are unappreciated by their husbands and reviled by white Americans. Through the chorus of voices we hear the same story over and over as these women attempt to maneuver through the maze of life as an immigrant. And for most the picture isn't pretty.

When the second generation is born, referred to as "they", the children revile their mothers for their old ways and for their poor English-speaking skills. Yet, the women still keep their few treasures from home---a white kimono for the wedding, a picture of a past lover, a small Buddha statue. When news reaches their ears that a list is being compiled of Japanese farmers as traitors of the USA after Pearl Harbor, the women wonder why they kept these treasures and attempt to destroy them before they are discovered.

This small book, really a novella at 129 pages, made a big impression on me. When the chorus of women speak up it is easy to see the travails of a people just trying to make something of their lives. It is horrifying to think how immigrants to the US are treated, not just in those days but also today. The country vowed to never do something as horrifying as internment of a people again after WWII. Yet here we are in 2019, creating camps and detention centers for people attempting to seek refuge in our land. Ugh.

I read this book to satisfy two reading challenges: 1. My Own Books challenge and 2. A Personal National Book Award challenge. In addition to being a National Book Award finalist for fiction in 2011, it won the Pen/Faulkner Award, and was chosen as the best book of the year by the Boston Globe. I will give this book away but I haven't decided who will receive it, yet. I think it is an important book and recommend it.