'My Own Books' Challenge update and two reviews

Today I completed my fifth book of  'My Own Reading' Challenge and with any luck I'll actually finish more than the ten books I planned to read by the deadline of this challenge on May 15th. It really feels good to get these read, many have languished on my shelves for years. And in addition, as I complete each book I am determining what will happen to it next: give it away, sell it, toss it out, or, with a few, keep it. The four books I finished prior to today have all found new homes. The books are:

I am breaking my own rules by reading them out of order but I found Redeployment to be very heavy so didn't want to add another heavy book to read at the same time in Ten Windows or The Four Things That Matter Most, so I started skipping around and, well, you can see I am not reading the books in order. 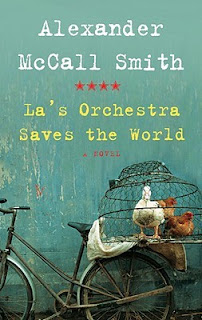 La's Orchestra Saves the World is a stand-alone book by the famed writer of several series, Alexander McCall Smith. His The #1 Ladies Detective Agency series is probably his best known, but I've read books in three of his other series and find them charming and usually very funny. This book, being a singleton, doesn't allow for the same level of character development nor is the subject matter very cheery or funny.

Summary: La, short for Lavender, is a college educated girl in the 1930s when most girls aren't. She marries her college sweetheart, which most girls do. The young couple move to London so La's husband can work for his father in the wine trade. After the rigor of college, La finds being a housewife a bit dull and lonely, as her husband is away on trips for the business quite often. But one day he doesn't come home and La is forced to confront the truth, her husband is no longer in love with her. In fact he has a mistress in France. His parents, as upset as La is about the situation, offer her their country home as a place to live away from the gossiping friends. La moves and ends up staying because of the start of WWII and the bombings on London. In an attempt to make her self useful for the war effort, she helps out a farmer, since his other farmhands were called to military duty and she starts a local orchestra with men from a nearby airfield and anyone left in the community who can play an instrument. Along the way she makes some good friends and maybe a more-than-friend, a Polish airman saved by the Brits who is also helping out in the war effort against the Nazis. The only problem is that this Polish man might be a German spy. La is very conflicted about what she should do.

Review: I liked the book fine and it was an easy read but it was not a characteristic McCall Smith novel. The topic was pretty serious, the characters were not fully formed or fleshed out, and the plot seemed a bit thin. I am glad I read it and I passed it on to my mom, who is another Alexander McCall Smith fan. I'd probably rate it a 3.5/5 stars. 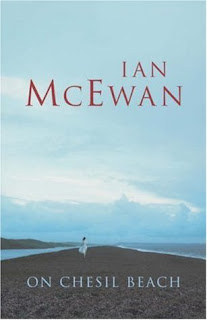 On Chesil Beach by Ian McEwan is another book written by a famed author and is also set in England. About three months ago I saw the movie "On Chesil Beach" starring Saoirse Ronan and Billy Howle so it was quite fresh in my mind as I read the book. Surprisingly, the movie and the book are very similar. Hollywood didn't change too many things so I had a picture in my head for nearly every scene.

Summary: Edward and Florence both grew up in Oxford, but they didn't meet each other until they both lived in London. Edward was a history major at university and Florence attended university for music and also was the leader of a strong quartet, playing first violin. The time period was the early 1960s when social mores were quite different than those at the end of that decade. The couple met at a meeting to oppose the nuclear bomb and from the first moment they saw each other, it was love at first sight. But they were very different people from very different backgrounds. These backgrounds should have kept them apart but the parents on both sides were accepting of the couple so they wed. On their wedding night things didn't go as planned and suddenly this brand new man and wife were forced to face a situation they were unprepared to face.

Review: I am not sure if "like" is a word I'd use for this book. Perhaps "admire" is a better word choice. McEwan is an exceptional writer and this drama is deep on many levels. I heard an interview of McEwan about this book and he expanded on several of the themes. One was about sexuality in the early 1960s as a very hush-hush thing. Couples likely came to marriage with no previous sexual encounters but also may have had very poor educations about sexual topics including knowledge about their own bodies and they usually had no one to talk to about their concerns. Another theme was about parenting. Edward's mother was mentally ill due a head injury and his father was overworked and tired. He was a good man but didn't have a lot of time to spare on conversations about the concerns of his children. Florence's mother was distant and cold. He father was very competitive and critical. McEwan never said it expressly but left the reader with the impression that incest may have occurred between father and daughter. There were a lot of skeletons in both closets, shall we say? This kind of drama, where issues are hinted at but never addressed head on, is the type of book I prefer or, at least, find intriguing. Another plus, the book is short, really a novella by its length of 188 pages. The depressing ending is one that will keep me from widely recommending it, though, since so many readers don't like to read books that don't have a Hollywood ending. I gave the book 4 stars and will share it with other book club members since it is a mini-book-club selection.

Posted by Anne@HeadFullofBooks at 7:21 PM