Review and Quotes---Voices: The Final Hours of Joan of Arc 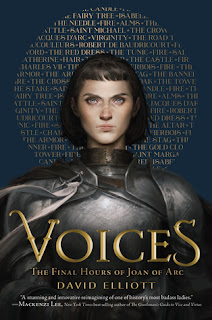 Title: Voices: The Final Hours of Joan of Arc by David Elliott

Book Beginnings:
Prologue--"From her earliest years till her departure, Jeannette [Joan] the Maid was a good girl, chaste, simple, modest, never blaspheming God nor the Saints, fearing God...Often she went with her sister and others to the Church and Hermitage of Bermont."---Perrin Le Drapier, Churchwarden and bell-ringer of the Parish Church, Trial of Nullification.

Friday 56:
JOAN
The next three years I often spent
alone. I did my chores as always
but the angels had shown me that
my life was not what I thought that
it would be. I was sometimes then
in a state of ecstasy, marred
only by the anxiety
of knowing what I was called to
do.

Summary: This book is written in verse and uses a variety of poetic forms which would have been found during Joan of Arc's day, takes a look at her life not only from the actual transcripts of the two trials: The Trial of Condemnation and, twenty-four years after her death, The Trial of Nullification, but also from a variety of narrators. The Book Beginnings quote is an actual quote from her second trial, made by a churchwarden in her defense. These actual quotes are interspersed throughout the book with poems imagining what Joan might have been thinking at the time. The Friday 56 quote is from one such poem. Here she has already been visited by the angels and the saints and yet she just continues her regular life, wondering what God has in store for her. Other narrators used throughout the book are items or concepts with which she grapples or used. Narrators like her dress that is abandoned for men's clothing, the sword that she uses, the concept of virginity, the road on which she traveled tell their side of her story. I know that sounds strange, but it works. Several of these poems are concrete or shape poems, forming with words into the shape of the object (a crown, needle, crossbow, etc.) Utilizing this very clever poetic device brought the poems forward in my mind.

Review: I enjoyed David Elliott's first book, Bull, which was the story of the Greek Minotaur. In that book he also explored poetic forms. I am not a know-it-all about such forms, but I think it is very admirable that he wants to stretch his own knowledge and understanding to even try to tackle such a project using medieval poetic forms here. Elliott's note at the end of the book said until he interspersed actual trial notes into the narrative, the story seemed flat and incomplete. I have not read any other book about Joan of Arc so I do not have a broad knowledge of her role in saving France and her martyrdom. This book makes it seem the biggest problem they had with Joan at her first trial, after which she was put to death by burning, was that she wore men's clothing. Obviously, for my own knowledge, I should do some additional research.

I read this YA title in a print book I checked out from the library. It has earned several starred reviews from professional sources:


★ "Elliot delivers another hit. . . . [Voices] showcases a gorgeous storytelling style that flows in an effortless fashion. . . . A glorious tribute to a woman who dared, defied, and defended her truth. A must-have."—School Library Journal, STARRED review

★ “Ethereal, wondering, and poignant. . . . An innovative, entrancing account of a popular figure that will appeal to fans of verse, history, and biography.”—Kirkus, STARRED review

★ "With stunning lyricism, these poems fashion an enlivened, gripping narrative that addresses themes of gender identity, class and vocation, and innocence and culpability, bringing fresh nuance to an oft-told story."—Publishers Weekly, STARRED review

I really do recommend that you read it.