Redeployment---a reading challenge with a friend 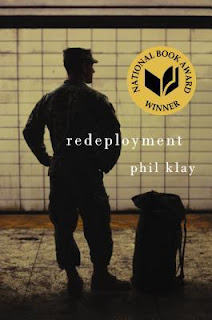 Today I finished the short story collection, Redeployment by Phil Klay. The book won the National Book Award in 2014 and I gave a copy of it to my husband for Christmas that same year. He was deployed to Iraq in 2004/5 with his Army National Guard Brigade and I thought it would be a book he could relate to even though all the characters in the stories were Marines. Honestly, I don't think it was the Marine issue that caused my husband to stop reading it mid-book. I think the book brought up memories and emotions that he just didn't want to deal with. After reading the book, I can appreciate that since many of the stories were very graphic and quite depressing.

When I embarked on my personal National Book Award project to read at least two of the category winners per year for the past ten years, I remembered the book, now gathering dust on my book shelf, and committed myself to reading the whole thing. A friend, whose husband is also in the Army National Guard, also had a copy of the book so we decided to read it together and discuss our progress on-line. Since I am retired and she is not, my progress was a bit faster than hers. Both of us, though, found the stories pretty distressing so could only manage reading small portions at a time.

I should say, just so I don't offend anyone, that members of the US Military hold each other in high esteem but it is common place for them to brag about their branch and make fun of the members of the other branches. Here, since we are both Army wives, there are a few comments where we make fun of the Marines. I would expect the same directed at the Army if the shoe was on the other foot. No harm or disrespect intended!

I have changed the name of my friend to respect her privacy but I have also received her permission to share portions of our dialogue. As you will see, I posted after every chapter, Jane posted less often.

Hi Jane. How's it going? I am finding the short stories very disturbing. Can only take them in small doses.

message 3: by Anne -
Mar 28, 2019 01:30PM
Jane wrote: "Same - it’s difficult going so far." When I complained about the book last night to Don he replied that he remembered the book as being very tough...too rough (in language and action) than was necessary. He abandoned the book midway for that reason. It wasn't cathartic for him as he hoped. (He blamed the problems on the guy being a MARINE. Ha!) I will continue reading but can manage one story a day at most. So I am adding another book to my daily reading to counter-balance this one. (Which is fine, since I often read more than one book at a time.)

message 4: by Anne
Mar 29, 2019 03:47PM
Jane wrote: "Same - it’s difficult going so far."  Today I read the third story about the soldiers talking about killing and the impact it has on them. There was a quote that I found pretty profound. "Combat is 99% sheer boredom and 1% sheer terror." I think that thinking about the 1% terror would terrorize me, so I'd be 100% terrorized all the time. Such awfulness.

34 books to one. Good odds. I started another book to read at bedtime, Gilead by Robinson, but it is also pretty slow and thought-provoking. I think I need to switch to something light and fluffy to counter balance this one, which I can't read at night. It harms my ability to go to sleep.

message 6: by Anne -
Mar 30, 2019 07:53PM
Today I read the fourth story, "Bodies", about a Marine whose assignment was mortuary services. I kind of skimmed past the gross stuff but the story made me pause thinking about the things we ask soldiers to do that no one thinks about.

message 7: by Anne -
Apr 01, 2019 04:40PM
OK. Finally. Stories that didn't destroy me. The fifth story should be read with an interpreter (someone in the military), though Don failed at his job in that role because so many of the acronyms were specific to the Marines, not the military in general. Very clever.

The 6th story, "Money as a Weapons System", is actually funny. It is almost like this story isn't written by the same guy. It reminds me of stories Don told of his time in Iraq trying to work on some solution with Iraqis and it was like banging his head against the wall.

message 8: by Anne -
Apr 02, 2019 09:44PM
I've crossed the Rubicon...I'm over half way done. The seventh story, "In Vietnam They Had Whores" is disgusting. It confirms what we've always thought about men and how often they think about sex. Yuck. I sped read this chapter. I didn't want the details seared into my brain.

Today's chapter, "Prayer in the Furnace", is about the war from the chaplain's point-of-view. There is a sermon in the middle which is SO good. It makes this whole book worth it for me.

Much sadness for these soldiers when they come home and have to live with themselves after the war.

message 10: by Jane -
Apr 05, 2019 09:49AM
I’m still with you, Anne, but I am a slower reader than you. Plus my copy of the book is paper only — that means I can’t read it when  my husband is asleep or it’ll wake him, and my days lately have been unusually busy. I think also the first couple stories were particularly tough for me— I work with many people who suffer from severe combat trauma and other forms of trauma, and I have to watch out a little for my own levels secondary trauma, if that makes sense. I always thought secondary trauma was something made up by therapists so they could have more work to do, but that is not the case. Anyway, that’s a way too long way of saying: yes, I’m with you even if I’m limping along more slowly.

The first story made me wonder if I could read the book, but the second, “Frago” was actually more do-able for me, though I got pretty sick of the Marine jargon. I’m far more comfortable with Soldiers — not just the terminology and manner of speaking. I feel like you sort of find your tribe, and Army folks are my tribe.  I love hanging out with Soldiers. This is a huge generalization, but I feel like Army folks tend to have more of a sense of humor, or a less nasty sense of humor, possibly?

Re the quote you spoke of from “After Action Report” - I liked that too. It says, “Somebody said combat is 99% sheer boredom and one percent pure terror. They weren’t an MP in Iraq.” Actually, my husband deployed to Iraq as an MP when he was still enlisted. I have no idea if it was like this story but for his sake, I hope not! I’m a little afraid to ask him about it.

It sounds like you’re able to talk to Don about the book, which is good. A. says he does not want to read it, and I doubt he will want to talk about it, but he is great for translating acronyms.

Anyway, I have to run, but at least the weekend is coming up. Maybe I can get caught up.

Don read a portion of the book before abandoning it. He talks to me about it because I follow him around the house asking him questions or reminding him what certain stories were about. Ha!

I just finished the longest "short story" in the collection. 44 pages. This one "Psychological Operations" takes place on a college campus. I felt a bit disconnected to this one, though I should have felt more affinity to it than the others because I can relate to those deep conversations co-eds can get into.

The second to the last story is about an officer who gets out and goes to law school. But even at NYU he can't escape all his thoughts that trail back to his time in the Marines in Iraq.

After the retirement party for D., I asked Don about his time in Iraq and noted how close he seems to be with the guys that he was deployed with in Iraq. I don't think there is anything similar in my life that I can relate to.

message 13: by Anne
0 minutes ago
I have reached the end. I wouldn't say it was an enjoyable experience but it was certainly eye-opening. The last story seemed the weakest of the bunch and left me pondering, as the character himself was pondering, about the pointlessness of war and all the deaths? I hope you continue and find your way to the end of the book, too.

I hope that Jane will join me on a reading project in the future on a book which isn't so challenging.
With the completion of this book I get to check off two marks for my challenge 'National Book Award Personal' Challenge and 'My Own Books' challenge. Woot woot.

Posted by Anne@HeadFullofBooks at 1:41 PM