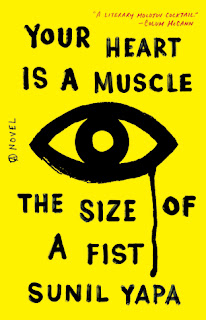 This month the Shepherd of the Hill Book Club will be discussing The Heart is a Muscle the Size of a Fist by Sunil Yapa. Though I am the club kit-selector, I tried to talk the ladies out of reading this book, thinking perhaps it contained a bit too much profanity for a Christian women's group. But the members overruled me. The reason I selected the book kit in the first place was because we live near Seattle and most of us remember the World Trade Organization (WTO) Protests in 1999. In fact, my husband, a Washington Army National Guard officer, was called up with his unit to help quell the riot. The hostess for this month's meeting has invited my husband, Don, to come as a guest speaker to shed additional light on what we read in the book. In preparation for book club, Don listened to the audiobook after I was finished with it. This blog post is a discussion between Don and me about its merits.

Me: I was always proud of you and the National Guard for your participation in quieting the WTO riot. But after I read even a small portion of this book I was aghast at what I learned about the police brutality. How accurately do you think that Yapa covered that aspect of the riot?

Don: First, we have to remember this is a work of fiction that is set within an actual, historic event. Some protesters were subjected to rough treatment, pepper spray, and tear gas as the police attempted to regain control of the streets. I think Yapa uses the many graphic descriptions of police violence to raise questions about the human cost of law and order on both sides, and which interests are served by law enforcement. I don't think Seattle PD was prepared for the scale and number of disparate protests. They had advance dialogue and ongoing negotiations with organizers of the several permitted marches and non-violent protests. But at ground level, when police officers were confronted with direct action and vandalism intended to shut down the WTO meetings, the political pressure to clear the path from hotels to the convention center translated to meeting force with force and some violent consequences.

Me: Were you aware of the reasons so many people showed up in Seattle to protest the World Trade Organization conference while you were on duty? I really had no idea how serious the issues were. In fact, I thought the discussion between the delegate from Sri Lanka and the bus full of arrested protesters was very enlightening. The one issue I had never heard of before was how one big conglomerate would sell infertile seeds to poor farmers, so that they would have to buy new seed every year, insuring that they remain poor and dependent on the company for their livelihood.

Don: I had followed news of anti-globalization protests at other cities that hosted previous world economic summits in the decade prior. In Seattle, many groups saw an opportunity to highlight various negative aspects of our increasingly global economy. As a supporter of organized labor and worker's rights, as well as my concern for the environment, my politics align with some of those concerns. I remember laughing with friends later that it would have been really strange if we'd seen each other across the lines during the WTO protests.

Me:  I was also struck by the seeming organization among the chaos of the riot. How did 50,000 protesters communicate with each other so that amid the chaos they were so effective in thwarting the police attempt to shut them down? Why was the protest in Seattle so much more successful than those held in other cities?

Don: While it's true that up to 50,000 people were involved in protests during WTO, a much smaller number engaged in rioting and vandalism. I think the book focused on one group of direct action organizers to represent the entirety of the protest against the meetings. In reality, you also had large labor union marches and rallies, environmental action groups, religious groups, and others including anarchists who were able to exploit the situation. Movements of large numbers of protesters were planned and coordinated, and leaders used cell phones and walkie-talkies to communicate. I'm not sure how much cross-group collaboration was going on, but the sheer numbers of people in a reasonably concentrated area contributed to the "success" of disrupting the WTO meeting.

Me: As we discussed the book, you kept pointing out some of the inaccuracies. What were some of these?

Don: Again, we have to remember this book is fiction so strict factual accuracy can't be expected. The author's standard disclaimer "any resemblance to any real person, living or dead, is completely coincidental" is included in fiction works for a reason. Very importantly, no Seattle police officer fired live rounds and killed a protester. I struggled most with the seemingly compressed timeline from my recollection of events. For example, President Clinton's arrival and speech to the WTO was the day after the worst of the demonstrations that had cancelled the opening ceremony. Here's a link to a timeline compiled by the city's WTO Accountability Review Committee that lays out the days before and after the events described in the book, which apparently focus on Tuesday, November 30th.

Anne: What did you think of the different characters in the book? Michel Schaub, reviewing the book for NPR, thought that Victor, the police chief's wayward son, was the most fleshed out of all the characters and thought the others "essentially stand-ins for ideals and emotions, or convenient foils for other characters. The two cops are tough but caring, and cruel but damaged, respectively, and the two main protesters are idealists whose thoughts and dialogue read like the bumper stickers on a VW in 1960s Berkeley" (NPR). Do you agree with this characterization?

Don: Perhaps we get a lot more introspection from Victor because he is still trying to figure out where he belongs in the world living with the grief of his mother's death and severed relationships with a father he never knew and step-father police chief. Victor is looking for purpose, acceptance, and love, as well as trying to make a few bucks selling weed, when he falls in with the direct action crowd -- King and John Henry, the preacher, two disaffected people committed to a cause or the thrill of the fight. The two police officers are interesting contrasts: Jules, two-time immigrant from Guatemala and Los Angeles; and Park, refugee from Oklahoma City bearing scars visible and unseen from the right-wing bombing of the Murrah Federal Building. Along with the step-father police chief, their commitment to maintaining order worn like their gas masks and riot shields to hide conflicted feelings and desires.

Anne: I wouldn't say that I liked the book. I actually thought it tried to do too much having several stories running underneath the WTO story, like King's Mexican experience, Victor's issues with his father, the police chief, and the back stories on the highlighted police officers. It was hard to keep track of all the details while trying to pay attention to the main event. What are your thoughts on this?

Don: I tried not to hear these as separate story lines, but as different flawed individuals trying to navigate the external conflict during the WTO (police vs. protesters; rich countries vs. poor; etc.) while they each dealt with even more profound conflicts within their own much smaller worlds.

Anne: What I did appreciate, however, is how the book served as a conversation starter for us. I realized that you and I have never really discussed your participation in the WTO riot past a superficial level. Good literature seems to cause people to go beyond the book and this one did for us.

Don: For your blog readers who don't know, I served as a Judge Advocate officer or military lawyer during the last 28 years of my Army career. In 1999, my rank was Major and I was detailed to serve as legal adviser for the WTO call up of a two battalion task force (about 1000 soldiers). I was called at my civilian office in the middle of the afternoon on Tuesday, Nov. 30, and after picking up my gear and some personal belongings, reported in about 8:00 that evening. We rolled into Seattle before dawn on Wednesday, Dec. 1 to put a perimeter of troops around the hotels and convention center, which was maintained around the clock for the next four days. I provided counsel to the task force commander and his staff, conducted briefings and training on the Rules for Use of Force, and did liaison work with legal counsel for Seattle Police and federal agencies, and the state attorney general's office. I made lasting professional associations with other National Guard soldiers during this intense week, who I would serve with for the next 18 years.

Anne: Thank you, Don, for putting so much time and effort on writing out your answers. Though not a favorite book, I think it will generate a good book club discussion especially if you come as guest speaker! And, as you know, I am very proud of your service to our country and state as an officer in the National Guard.