Book Beginnings on Friday is hosted by Rose City Reader. Share the opening quote from the book.The Friday 56 is hosted at Freda's Voice.  Find a quote from page 56.
And a review, of sorts to follow--- 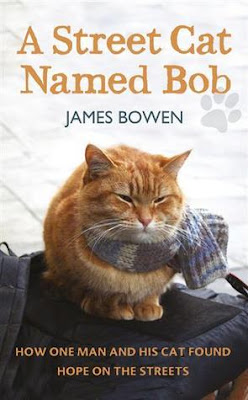 Title: A Street Cat Named Bob: How One Man and His Cat Found Hope on the Streets by James Bowen


There's a famous quote I read somewhere. It says we are all given second chances every day of our lives. They are there for the taking, it's just that we don't usually take them. I spent a big chunk of my life proving that quote.


For the next forty-five minutes or so, Bob sat quietly next to me, his face pressed against the glass of the bus window, watching the world go by. He seemed to be fascinated by all the cars, cyclists, vans, and pedestrians whizzing past us; he wasn't fazed at all.

Summary: James, the author of this true story, is a recovering drug addict who was busking on the streets of London when he discovered a friendly but bedraggled cat outside the door of an apartment near his. For several days he kept his eye out for the cat before he finally adopted him and named him Bob. The cat was tremendously smart and friendly and soon James found his life shifting in unpredictable ways. First Bob wanted to come with him, on the bus, to the site where he would play his guitar for tips. The tips increased because of Bob. Next James found that his desire to use drugs again diminished because he had a cat to take care of. He found that his loneliness, which he credited his drug use to, also diminished and he was able to connect with people, including his family, again. James may have saved Bob from starvation, but Bob saved James' life, too.

Review and comments: My daughter was given this book by family friends after she cat-sat for them. I don't think she ever read the book. About the same time I gave a copy of the same book to my dad for a gift because his name was Bob and I thought he would think it was funny. I am not sure if my dad ever read the book, but my mom did and she kept telling me how inspiring it was. I started reading it because of the 'My Own Books' reading challenge to read books from my own shelves. I am glad I did, too.

My mom was right. The story really is inspiring. James, who was really struggling in his sobriety, found a help-mate in Bob-the-cat. They had a unique and astonishing relationship. Bob would travel around the city with James, sitting on his shoulders or walking by leash. The two became kind of famous, too, though they would often find themselves in trouble because of other jealous buskers, or because of people doing stupid stuff to scare Bob or upset James. By the end of the book, James has reconnected with his mother, who lives in Australia, and has found a different job on the streets selling homeless magazines. It still sounds rough but the pay is more stable. And, most importantly, he has weaned himself off methadone, which he was using as maintenance to stay off heroin. Things are looking up for man and cat.

There are two sequels to this book. I hope to read them, too, because I am very curious how James came to write the books in the first place and what has happened to his life after writing them.

Source: Print copy found on book shelf, read for 'My own book' challenge. I will return it to my daughter this weekend as we travel to visit her in San Francisco.

Posted by Anne@HeadFullofBooks at 10:49 AM