R.eaders I.mbibing P.eril  is what the title stands for. This reading challenge officially runs from September 1 through October 31. It is perfect for ushering in the Fall season. I have currently finished one book which is part mystery, suspense, thriller, Gothic, mild horror and supernatural book . This qualifies me for: 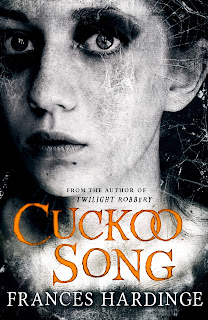 Cuckoo Song by Frances Hardinge first came to my attention because it earned five starred reviews from the publications School Library Journal, Booklist, Publisher's Weekly, and the like. I try to review the highly regarded books as potential Mock Printz books and this one sounded like an intriguing selection since it seems to defy genre categorization. We always try to offer selections in different genres and this book helps our list seemed more varied.

When Triss wakes up after an accident, she knows something is very wrong. She is insatiably hungry, her sister seems scared of her, and her parents whisper behind closed doors. She looks through her diary to try to remember, but the pages have been ripped out. Soon Triss discovers that what happened to her is more strange and terrible than she could ever have imagined, and that she is quite literally not herself. In a quest to find the truth she must travel into the terrifying underbelly of the city to meet a twisted architect who has dark designs on her family—before it’s too late. Set in England after World War I, this is a brilliantly creepy but ultimately loving story of the relationship between two sisters who have to band together against a world where nothing is as it seems.---from the publisher

My daughter got to read this book before me and fairly flew through it, finding a Gothic fantasy to be just the perfect type of book to read on her breaks at work. (By contrast she is having a much more difficult time with the realistic fiction book is carrying around with her now.) She urged me to read it and she recommended it for possible inclusion on our MP list.

What I like about Cuckoo Song is how nuanced the horror is. There are terribly creepy characters, but they aren't invincible. I found scenes to be both creepy and compelling at the same time. The scary bits weren't scary enough to keep me awake at night, which is something I attempt to avoid. Triss and her sister, Pen, both have dark and light sides to their nature. I found myself rooting for both of them at different times. It also captured that time period between WWI and WWII in England when so many families were left to carry on without loved ones or had to deal with the soldiers who returned with PTSD.

If there is a weakness in the book it is that the characters, other than Triss, who we discover is really a changeling, and Pen, all other characters are not very well flushed out.  We don't really understand why the mother is so inept and the father so controlling. Mr. Grace goes from nice to sinister in record break time. And Violet. Hmm. I didn't get nearly enough information about her.

But boy is this book creative. Krista Hutley, writing for Booklist, says the book is a "piercing, chilling page-turner." She also says few authors can evoke such a feeling of terror and wonder at the same time as Hardinge. This is my first book by the author but I will certainly look into her others. I liked this book a lot and we did decide to include it on our Mock Printz list of books for the year.

Posted by Anne@HeadFullofBooks at 7:55 PM