Ishmael by Daniel Quinn. A review and a commentary. 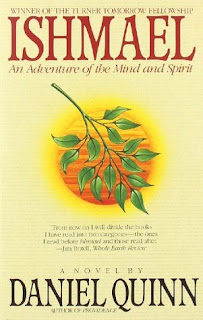 Our high school requires students to read one book over the summer. Students from each incoming class can select their reading material from a list of books. Ascending seniors can choose Ishmael by Daniel Quinn, a book with a provocative reputation. I decided to read it after book-talking it for a class last spring. It sounded interesting...a talking gorilla who wants an assistant to help him save the world. Sounds intriguing, doesn't it?

And the book is intriguing.  In fact the philosophy introduced by Ishmael, the gorilla, is very thought-provoking. Through a series of Socratic-type questions Ishmael gets the unnamed narrator to recognize and embrace his world view. This view is basically that mankind can be divided into two camps: Leavers and Takers. Up until a few thousand years ago leavers roamed the earth using only what they needed and living in harmony with creation. Then a shift occurred and some men decided they wanted the land on which leavers were living. In order to get it, they killed the leavers rather than asking to share. These people became takers.  Takers act as if their way is right and other people are wrong and because they are right they should have whatever they want. This aggressive approach to life has led to wars and in some cases to the near annihilation of certain people. It is also causing catastrophic problems for the environment.

Interestingly, Ishmael points out, Takers need a prophet or god-figure to tell them how to live and to guide their actions. Whereas Leavers, who already live in harmony with nature and their creator, do not. Takers now use their Holy books and their interpretations of them to continue their march toward sure destruction and the demise of mankind. The stories they tell themselves about the creation of the world even plays into this philosophy.

This book presents heavy, thought-provoking stuff. After it was published in 1991 Ishmael Societies were formed where members could get together to discuss not only the meaning of the book but also to explore ways to abandon the Taker mentality and embrace the Leaver lifestyle. I have no idea if any of these Societies still exist today. It is an interesting concept, for sure, and it is one which has been much on my mind since I finished the book a few weeks ago.

There is evidence everywhere that we, mankind, by and large do embrace the Taker mentality...or "my world view is right and if you disagree I will fight you, demonize you, or even kill you." This week I found more evidence to support this. The Pope visited America. Pope Francis does not mince his words. He admonishes Christians to live their faith, to help the poor and down-trodden, to stop doing things that contribute to global warming, to live in harmony with others and with nature. Instead of falling on their knees seeking forgiveness for their hard hearts, some conservative commentators have decided to demonize the Pope, calling him a false prophet or the Antichrist (Napolitano). See what I mean? If someone believes differently than a Taker, they demonize that person. It is quite sickening, actually. It is hard to believe that anyone who witnesses the actions of this Pope could think anything but admiring thoughts about him, no matter what faith tradition they hold. But there you have it. He is now the "Antichrist" because he dares to say something about global warming and living in harmony with our neighbors which goes against some people's 'rich at any cost' philosophy.

It is a depressing thought, but maybe Ishmael is correct. Could we be on a collision course with our own destruction simply because we believe our made-up stories about how we are right and others are wrong? It is a heavy thought.

If you do choose to read Ishmael, I urge you to find a reading companion so you will have someone to talk to as you make your way through it. I suspect that was the reason for the Ishmael Societies springing up when the book was first published. This is not the type of book that sits well or easily and it demands to be discussed. I am going to advocate that we remove the book from our summer reading list. I think this book is too heavy for an ascending senior to digest on his/her own. It is the type of book which should be read and discussed in a class with a thoughtful, prepared teacher at the helm.

If you have read Ishmael, even if it was years ago, I'd like to hear from you. I am very curious how this book simmers in the background of the brain over time. Let me know.

Posted by Anne@HeadFullofBooks at 9:26 AM