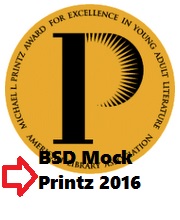 5. All the Bright Places
by Jennifer Nevin

6. The Game of Love and Death
by Martha Brockenbrough

12. Ghosts of Heaven
by Marcus Sedgwick

13. I am Princess X
by Cherie Priest

15. The Tightrope Walkers
by David Almond

16. The Wrath and the Dawn
by Renee Ahdieh

17. The Unlikely Hero of Room 13B
by Teresa Toten

This year we decided we didn't want to just focus on books with four to six starred reviews but also wanted to include titles which we think would really strike a cord with our teen readers, even if those books only have two or three starred reviews. We suspect that a few of the books on our list won't be serious contenders, but we love them anyway and want to encourage a wide variety of reading experiences for our students.

With so many great books just being published (or not quite published) we also wanted to leave the door open for a few other books and may add them to our list after we've had a chance to preview them:

Lastly, we simply ran out of time at our meeting to debate which, if any, of the nonfiction offerings we should choose this year. We narrowed the list down to these four books. As soon as we have consensus, we'll finalize the list.


Tommy: the Gun that Changed America by Blumenthal


Boys Who Challenged Hitler by Hoose

Most Dangerous by Steve Shienkin

The goal is, if you are willing to accept it, to read as many of these books as you can before the
ALA Mid-Winter meeting which ends of January 12, 2016.

Posted by Anne@HeadFullofBooks at 4:08 PM