The Boys Who Challenged Hitler 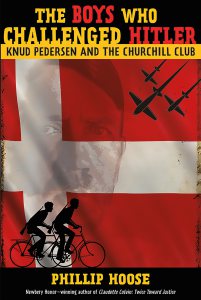 At the outset of World War II, Denmark did not resist German occupation. Deeply ashamed of his nation’s leaders, fifteen-year-old Knud Pedersen resolved with his brother and a handful of schoolmates to take action against the Nazis if the adults would not. Naming their secret club after the fiery British leader, the young patriots in the Churchill Club committed countless acts of sabotage, infuriating the Germans, who eventually had the boys tracked down and arrested. But their efforts were not in vain: the boys’ exploits and eventual imprisonment helped spark a full-blown Danish resistance. Interweaving his own narrative with the recollections of Knud himself, here is Phillip Hoose’s inspiring story of these young war heroes.---From the Phillip Hoose Webpage.


Several years ago I was doing some reading about WWII and I cam upon some information about Denmark and WWII. The source said something about the Dane's saving almost all of their Jewish citizens but sending them to Sweden. I didn't read much more and thought that the Danish people must have been so brave to stand up to Hitler. After I read this book I learned it was a bunch of teenage boys who spurred them into action. Knud Petersen and his friends were ashamed of their countrymen and the adults that seemed to just roll over with out any resistance. They wanted to be like the Norwegians who were putting up a huge battle against the Germans and continuing with brazen acts of resistance. But what could teen boys do to fight the behemoth? Knud and his friends thought up a lot of things. Some were simple like changing street signs to confuse the Nazi's, and other things much more daring like stealing their weapons and setting fire to their cars. When the boys were finally caught and imprisoned the country seemed to awake from their stupor. It took the daring, audacity of teen boys to call a country to action.

Hoose does a fantastic job telling Knud Petersen and the Churchill Boys' story. The book is very readable and should be on had at all secondary schools and public libraries for school reports and to fill out the WWII collections.

It amazes me that stories are still coming forward about a war that ended over seventy years ago. Knud Petersen and his friends were true heroes (though they would have given their mother's fits!)


30 / 30 books. 100% done!
I have officially completed my summer reading challenge with this book.

Posted by Anne@HeadFullofBooks at 5:59 PM