The Alex Crow by Andrew Smith 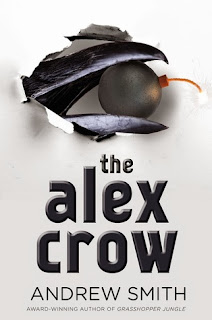 How does one write a review for one of the weirdest, most brilliant YA books ever written? I have hemmed and hawed over this question for weeks and finally give up.  I have no idea. I'll just write a little and call it good and hope that my efforts thrust you in the direction of Andrew Smith's books. OK?

A little about the author:
Andrew Smith is a high school teacher in California. He writes in the morning before a full day of teaching. Even though he could give up teaching to pursue writing full-time, he loves the kids too much, so he continues on with his day job. Pretty cool, huh? I understand that other YA authors love to do book events with him because his students show up! I'd love to witness that.
His book Winger, my first of his, is semi-autobiographical. Apparently Smith skipped a few grades and had lots of problems because of it.  He also had a very unhappy, or more correctly, an unsafe childhood with abusive parents. They did not encourage his dream to be a writer and he was often beaten. In Winger the main character is in a private school where he has skipped two grades so he is smaller and younger than all his classmates.
Smith was discouraged by reviews of his early books which criticized his work. He resolved to forget about publishing and just write for himself. The product of that decision was Grasshopper Jungle, a highly awarded book published last year. Thankfully he didn't stick with his decision to no longer publish his works.

What people say about Smith and his book The Alex Crow: (Goodreads)


What is the book about?
This is a very hard question to answer. Let's see, first I should say there are five story-lines that all converge at the end of the book. It doesn't seem possible but it does happen and all the parts are drawn together.

See what I mean? How can someone describe these things and even get close to doing them justice? And yes, the book is weird, very weird.

The best review I've read of this book and about Andrew Smith is linked here:
Entertainment Weekly by Anthony Breznican. I liked Andrew Smith and his books before I read this review, now I love him.

My thoughts:
Last year I wasn't courageous enough to add The Grasshopper Jungle onto our Mock Printz list even though I recognized its genius. This year I am not making the same error. Kids deserve to be introduced to a wide variety of YA genres and since this one clearly does not fit into any of those genres, they need to read it.  And so do you.  And, by the way, don't worry if you don't "get it" in the beginning.  It all comes together in the end. Andrew Smith has kept to his motto:

Posted by Anne@HeadFullofBooks at 12:20 PM