The Tightrope Walkers by David Almond 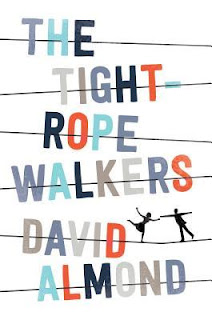 A few weeks ago I finished the coming-of-age tale The Tightrope Walkers by David Almond. I have been sitting on this review ever since because I am very conflicted about the book. But I get ahead of myself.

Almond mines the 1950s and 1960s in post-war northern England for his setting and characters and hits the mother lode. The story of  Dominic Hall begins on the bank of the polluted Tyne River near the ship yards where he and his parents live in a hovel. But that hovel is torn down and they move to a better housing situation on the estate, still near the shipyards where his father works. Dominic is a boy torn in half. Half of him is drawn to the lovely and cultivated Holly, who lives just across the street from him and has been his friend since infancy. The other half is drawn to the ne'r-do-well town bully, Vincent. With Vincent Dominic explores his darker self and often wonders if all boys go through this stage of destructive activities. In a lot of ways his parents represent the two halves of his life as well. His mother is kind and gentle and encourages Dominic to do well in school and praises his writing. His father encourages Dominic to explore his boyhood by giving him a knife and allowing him to handle a gun, but, like Vincent, the father is often unpredictable and has a very angry side. Finally an event tips the scales in one direction and Dominic comes into his own identity, Not Holly or Vincent, somewhere he balances his life in between.

What do the book critics have to say?


Almond’s rough, beautiful world of books and ships, sinners and saints is a lyrical reminder of how, when we lose our equilibrium, art can redeem us.—The New York Times

The award-winning Almond poetically plumbs the depths of his 1950s and '60s childhood to explore themes of violence, war, God, creativity, beauty, death, art, the soul, our animal selves, whether we ever grow up or can really know each other…in short, life.—Kirkus Reviews (starred review)

The novel is Shakespearean in its breadth, earthiness, and emotional pitch... Is the overall mode comedic or tragic? There is much room for discussion in this difficult and brilliant novel. —Horn Book (starred review)

Teens will feel the events most viscerally—the brutishness, the love, the rejections. Adults, meanwhile, will bring their own world-weary self-knowledge, which cuts in its own way. Wild and reckless, heartbreaking and hopeful—this elegy on life is not to be missed.—Booklist (starred review)

Booklist touches on my conflict about the book. Is this book really a book for teens or is a book about teens for adults? I think it is the latter and so does the book's published in the UK. A review in The Guardian, London's big newspaper says, "The Tightrope Walkers is Almond's second book for adults; he has won...award[s] for his many children's novels... Even in writing for adults, though, Almond threads the fantastical and imaginative through the drabness of the mundane, alternating lyricism with rough realism."

So which is it? A young adult book with more starred reviews than just about any books published this year, or a fabulous adult book? As I was reading the book with my reviewer's cap on my head, I kept wondering to myself if teens would like the book, if they would recognize the literary merit behind the prose. I don't know the answer. I am quite conflicted.  I guess my advice to you is to read the book and decide for yourself. Most adults enjoy reading young adult fiction occasionally and the reverse goes for teens.  But I'm with the School Library Journal reviewer who cautions us to be aware, this is a "book for mature readers."

Posted by Anne@HeadFullofBooks at 4:36 PM