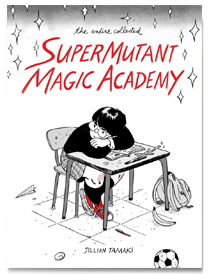 Back in 2010 Jillian Tamaki started a webcomic named SuperMutant Magic Academy. The book by the same name is a collection of the best of those webcomics plus a 40 page story at the end to conclude the series. I didn't know about the webcomic until today when I was looking around on the Internet for information about the book and the author/illustrator Jillian Tamaki and I ran into her webpage about it. Here is what I found:


UNREQUITED LOVE, UNDERAGE DRINKING, AND TEEN ANGST RULE AT A HIGH SCHOOL FOR MUTANTS AND WITCHES

New York Times and New Yorker illustrator Jillian Tamaki is best known for co-creating the award-winning young adult graphic novels Skim and This One Summer–moody and atmospheric bestsellers. SuperMutant Magic Academy, which Jillian has been serializing online for the past four years, paints a teenage world filled with just as much ennui and uncertainty, but also with a sharp dose of humor and irreverence. Jillian deftly plays superhero and high school Hollywood tropes against what adolescence is really like: the SuperMutant Magic Academy is a prep-school for mutants and witches but their paranormal abilities take a back seat to everyday teen concerns.---SuperMutant Magic Academy Webpage

Every page is a scene in the day-of-the-life of students from the academy. Some of the scenes are funny, some realistic, some absurd, and while others are poignant. It took me a good fifty pages to "get it" and just settle in to reading the little blurbs and quit looking around for a cohesive story. Just try to imagine for a minute if you took twenty five teenagers (or so) and isolated moments in time and then placed them all together in some format what a mishmash of stories you would uncover. No doubt there would be some recurring themes, but there would also be these random, out-there comments that don't seem to fit. That is what it is like reading SuperMutant Magic Academy.

This comic really made me laugh since I am always running around looking for material for my blog: 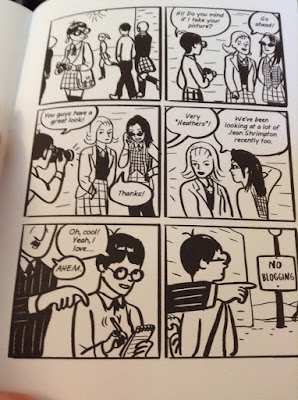 And this comic just seemed like a real conversation between two friends, concerned about the future but at the same time willing to put-off thinking about things in the present tense. 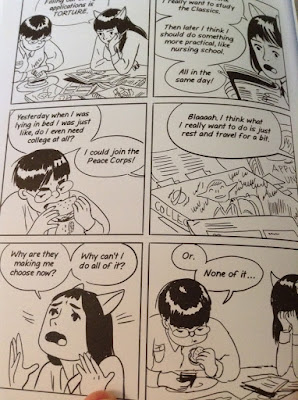 It took me ages to complete the book probably because I was going about it all wrong in the beginning by trying to find a cohesive story within, and then because I kept attempting to read it in bed and would fall asleep before much progress was made.

As I neared the end of the book I realized something that I missed in the beginning, too. The book is brilliant. Simply brilliant. Tamaki is spot-on with her observations of teenagers. Don't adults often view teens as if they are mutants from another planet? We stand around and judge them according to our life experiences while they are just trying to figure things out for themselves. Tamaki drew many of her characters as mutants, some with chicken heads, horns, or lizard faces. Do you remember ever feeling like that? Like you were from some other place and every thing about you stuck out or was different---your hair was too frizzy, or your zits too pronounced, or your feet too big? Tamaki understands this about teens by magnifying these characteristics and then making none of the characters aware of the differences in each other. Brilliant.