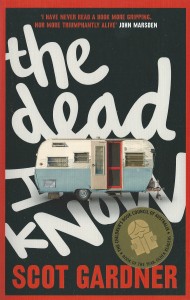 My daughter, Carly, and I recently read the same book, The Dead I Know by Scot Gardner. In lieu of a regular review, this post will reflect the conversation we've had about the book.

First a little summary: Aaron Rowe is a troubled teen who lives with his Mam in a trailer park. Things aren't going well for Aaron. He has nightmares that involve dead people and he sleepwalks, often miles from his home. . He is worried about his Mam who seems to be losing her mind. As hard as Aaron tries he can't seem to protect her from herself. But one thing is going well for Aaron, his internship as a trainee at John Barlow and Associates, a funeral home.  Working with the dead is somehow comforting and John Barlow thinks that Aaron is a natural for the mortuary business.


What was your reaction to how many details the book gave about corpses?

Aaron is a loner and seems to be tortured by some past memories or events, did the author help us understand what was going on?

Posted by Anne@HeadFullofBooks at 9:15 PM