Review: The Walls Around Us by Nova Ren Suma 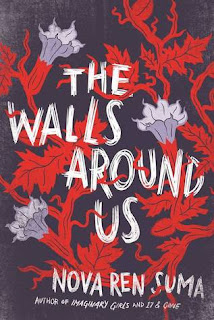 A disconcerting thing has happened. I have almost completely forgotten the details of a book I finished only a month ago. In fact, it took be a whole paragraph before I recognized  the plot of The Walls Around Us by Nova Ren Suma. In light of these glowing, starred reviews I'm beginning to wonder if it is me, not the story that is slipping.


Suma excels in creating surreal, unsettling stories with vivid language, and this psychological thriller is no exception. Along the way, Suma also makes a powerful statement about the ease with which guilt can be assumed and innocence awarded, not only in the criminal-justice system but in our hearts—in the stories we tell ourselves. A fabulous, frightening read. -Booklist, April 1, 2015, starred

In lyrical, authoritative prose, Suma weaves the disparate lives of these three girls into a single, spellbinding narrative that explores guilt, privilege, and complicity with fearless acuity. Amber's voice is particularly affecting -- she narrates from an eerily omniscient first-person plural perspective that speaks powerfully to the dehumanizing realities of teen imprisonment. The twisting, ghostly tale of Ori's life, death, and redemption is unsettling and entirely engrossing. -Horn Book Magazine, March/April 2015, starred

Believable and well developed, Vee and Amber have strong, unforgettable voices that ring true. Suma's unflinchingly honest depiction of the potentially destructive force of female friendship and skillful blending of gritty realism with supernatural elements is reminiscent of Laurie Halse Anderson's Wintergirls (Viking, 2009), and the eerie mood she evokes is unnervingly potent. VERDICT A powerful story that will linger with readers. -School Library Journal, March 2015, starred

"VERDICT A powerful story that will linger with readers." Hmm. Apparently the story didn't linger long for me as the SLJ reviewer predicted. But I wonder sometimes if consuming books as fast as I do doesn't allow for proper marination of each of the tales. Looking back on my Goodreads account I see I've read ten books since completing this one. No wonder the details are a bit fuzzy. Oddly, I remember quite clearly Nova Ren Suma's previous book, Imaginary Girls  which I read a few years ago, and I have been creeped out by the memory of it ever since, too. Suma knows how to write hair-raising tales.

At any rate here are a few details I do remember now and I shan't give any big spoilers.
Based on my rereading of the starred reviews and my hazy memory, I'd say that The Walls Around Us is worth your consideration. Especially if you like to read ghostly/horror mysteries.

Posted by Anne@HeadFullofBooks at 1:44 PM