Go Set a Watchman---a few thoughts and a short review 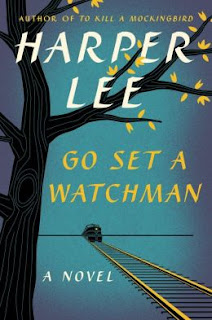 Everyone is talking about it. Go Set a Watchman, Harper Lee's second or first book, which ever way you want to look at it, is causing quite a stir in the literary world. Why? Because the fair-minded Atticus we know and love from To Kill a Mockingbird turns out to be not so fair-minded. In fact, he looks for all intents and purposes as a racist.

Before you wrinkle your nose and make a decision to not read Go Set a Watchman, and to possibly give TKAM the heave-ho at the same time, let me share a few of my thoughts.

Harper Lee wrote Go Set a Watchman in the mid-1950s. The civil rights movement was just gearing up at that time for many reasons. Here are a few of them:
Harper Lee lived (and still lives) in Monroeville, Alabama in what we would consider the Deep South. As she was writing her book Go Set a Watchman she would not only have been very aware of the events mentioned above, she would have been living them. She likely had friends or family members on the White Citizen Councils. Her community was no doubt involved in resistance of segregation and a tightening of Jim Crow laws. This was her world at the time.

We now know that Go Set a Watchman was rejected by her publisher originally with a suggestion that Lee go back and write more about the childhood memories and events. That advice led to the writing of To Kill a Mockingbird and we all know how that turned out. Most experts thought her first book was just essentially an earlier draft of TKAM not realizing it was a separate novel about Scout twenty years later. After reading it, I completely understand why the publisher rejected GSAW in 1955. It would have been like publishing a book in Germany during WWII about the horrors of the Holocaust. The world, especially the South, was not ready for it.

Years ago when I read Sylvia Plath's classic novel, The Bell Jar, I was struck by how historical it felt. She wrote it in the late 1950s but I read it in 2010. I kept thinking how different the world was "back then" as I read it, even though fifty years didn't seem like a long time historically. I had the same sensation as I read Go Set a Watchman. Harper Lee didn't write it as an historical novel, she wrote it as current events. It was present-day to her at its writing. The world wasn't ready for it then and may not be happy about it today because the mirror that the book holds up for us to view doesn't reveal a very pretty world.

I personally loved the book. Yes, I was disturbed by what I learned but the book rounded out a picture for me. Atticus isn't a god. Good people often do and say unkind, even awful things. Children are often forced to learn things about their parents which make them more human but may bring them down a notch. But as the quote on the back of the book says, "Every man's island, Jean Louise, every man's watchman, is his conscience." We have to learn to heed our own watchman, even if he is guiding us on a route different than our parents and our past.

I'd love to hear from you as to your thoughts about the book.

Posted by Anne@HeadFullofBooks at 9:21 AM