A few literary moments with To Kill a Mockingbird 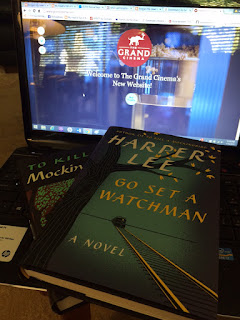 We sat in the darkened theater, popcorn in hand. Never mind we were in the front row. We made it. The movie was just beginning. I couldn't believe my luck. I was going to see the film "To Kill a Mockingbird" starring Gregory Peck for the very first time and I was going to see it on the big screen at that. It was roll-back Wednesday at the local indie theater in Tacoma, The Grand Cinema, and fortunately for us, I purchased our tickets on-line earlier in the day because by the time we got there it was sold out..

On the way to the theater we had been listening to the end of To Kill a Mockingbird in the car together. The audiobook version we have is read by Roses Pritchard. She has such a lovely Southern accent and reads Scout's lines especially well. I think we've listened to the book at least three times before but it was important to listen to again this week since Go Set a Watchman was set to come out on July 14th. We wanted to be prepared. I was the only one who heard the full book this time however, since we listened in fits and starts. First my daughters and I played it on our trip to Portland last weekend. Then my husband, younger daughter, and I listened to a bit more on our adventure day trip to the Nisqually Wildlife Refuge on Monday. I fit in a few more chapters on Tuesday before the three of us finished up on Wednesday.

As the movie was rolling along my daughter and I kept repeating lines from the book that the movie altered or omitted. I'm sure it was irritating to those around us but, hey, we were in the front row we deserved some compensation! About half way through, the movie just stopped working. Everyone stood up and stretched, went for more popcorn, and complained to the management, just as though we we were watching it in 1962. We all remembered going to the movies when something like this happened in yesteryear.  Too funny. Once it was rolling again. I looked over at my family, pinched myself, and said, "remember this moment, Anne, when you are having such a literary moment with most of your family."

It was one of those moments...brought together by good literature. Sigh.

Posted by Anne@HeadFullofBooks at 12:09 PM