Weather: A storm moved through the area yesterday with heavy rains and thunder/lightning. This morning it is hard to tell what will happen.

What a week! My sister's 60th birthday involved a raft trip down the McKenzie River in Oregon; plays in Ashland at Shakespearean Festival; and a birthday party breakfast followed three days later by a birthday party luncheon. In between I attended my 40th high school reunion in Corvallis. And to get everywhere involved lots of driving.
Raft trip: My sister arranged and invited seven of us to join her on a float down the beautiful McKenzie River in Oregon which involved a few whitewater stretches. It was very scenic and serene most of the time. It felt like we had the river to ourselves for most of the ten-mile trip.
Ashland: Plays, plays, plays. Ashland, Oregon is host to a huge Oregon Shakespeare Festival every year. They have three theaters and run a dozen or more plays through them on a rotating basis. The first night we were there we say "Head Over Heels" which was a world premiere musical and a mash up of Arcadia, an epic poem written in Shakespeare's day, and music from the Go-Go's, a pop band from the 1980s. It was good fun. This was performed in the large outdoor Elizabethan Theatre. (See photo.) The next day we attended a matinee in the smaller Thomas Theatre, "The Happiest Song Plays Last."
Both plays were excellent and so different. After the matinee I jumped in the car and raced north to join my high school classmates for a reunion. My daughter stayed behind with her cousin and aunt. They saw two more plays: "Guys and Dolls" and "Much Ado About Nothing."

40th Reunion: I graduated high school in 1975 with around 270 other students. This past weekend around 70 of us gathered for a reunion. I haven't done a good job staying in touch with most of my old classmates but it was very fun reuniting for a weekend of reminiscing and updating.

Spiritual homecoming: We haven't been back to Corvallis for years since my parents moved away in 1984. As we were driving around town on Saturday before the reunion dinner, Don and I went past the church I attended all the years I lived in Corvallis and where we were married. We decided to attend services the next day. As we entered the sanctuary I was bowled over by the rush of memories. The organist was playing something on the pipe organ, the familiar stained glass windows telling the story of Jesus's life, the beautiful wood benches and ceiling just swept me up. I was returning to my spiritual home where I first experienced God in a real way. I turned to Don and noticed that he too was "misting over" as he was remembering the place where we married. One of my best friend's mother and father came and sat with us, so a few folks remembered this gal who found her spiritual footing in this place over forty years ago.

Currently reading:
Drive home: after leaving Corvallis I had to drive south to Eugene to pick up Carly who came up from Ashland with my sister and her husband earlier in the day. My mom hosted a birthday luncheon and then we headed north right into heavy traffic. The trip took over an hour longer than usual to get home. Don had a light dinner waiting for us and we fell into bed. It was a long, but rewarding week! 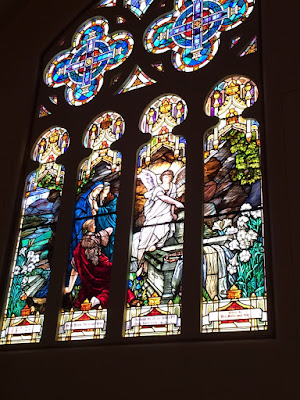