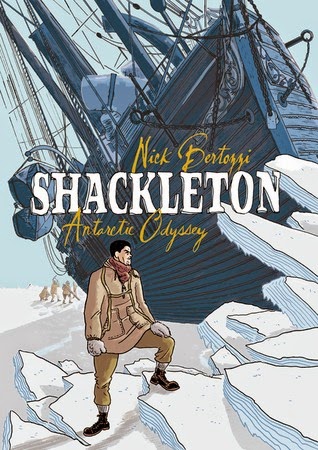 Sir Ernest Shackleton's odyssey to Antarctica in 1915 is one the most legendary survival stories of all time.
When his expedition arrived aboard the Endurance in Antarctic waters in January 1915 they planned a transcontinental trek. Instead the Endurance got stuck in the ice. Now his party had to wait through the whole winter and hope the ship would survive to transport them home. It didn't. In October, the Endurance broke up in the ice and the men were forced to save themselves making camp on the ice and by dragging the lifeboats until they reached open water. In formidable conditions they navigated two boats to Elephant Island where half the party wintered. Shackleton and several others braved an additional 800-mile trek through stormy seas to reach South Georgia Island, which was inhabited by a few whalers. In all not a single man was lost or died. It is truly an amazing survival story, one we would expect to read about in a novel, not real life.

Now Nick Bertozzi has brought the Shackleton story to life again through his excellent graphic biography. He wanted the book to not only tell Shackleton's story but wanted it to honor all the men on the expedition and their contributions. It was amazing how they helped each other to stay positive and cheerful is the face of the gravest situation. They played games, acted out plays, and hunted. One of the men was willing to go back on board the Endurance, even though it was clear that it was breaking up, to rescue the deck of cards.

Nick Bertozzi's drawings bring Shackleton's story to a new generation. Can you imagine why anyone would have answered this ad, run in the London papers in early 1914 to join him as crew on the journey?
"MEN WANTED: FOR HAZARDOUS JOURNEY. SMALL WAGES, BITTER COLD, LONG MONTHS OF COMPLETE DARKNESS, CONSTANT DANGER, SAFE RETURN DOUBTFUL. HONOUR AND RECOGNITION IN CASE OF SUCCESS. -SIR ERNEST SHACKLETON"  Yet 28 men did answer the ad. Bertozzi honors their stories as well. They all survived and everyone credits the sheer force of will of Sir Ernest Shackleton.

For more on the voyage of the Endurance, check out this website.

My only complaint about the book probably says more about me than about the artwork. I wished that the words were larger in the text boxes. Ha! Guess you can tell who has aging eyes.

Posted by Anne@HeadFullofBooks at 9:13 PM