Gandhi: My Life is My Message 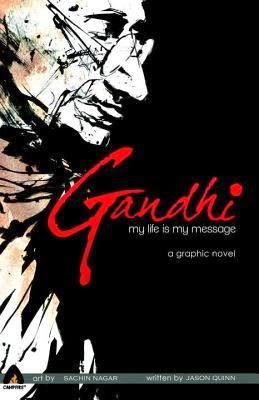 Mahatma Gandhi, the great prophet and statesman from India lived almost his whole life on center stage and yet he maintained his message of positive change through peaceful resistance throughout his whole life. Gandhi, His Life Was His Message by Jason Quinn is a graphic (illustrated) biography of the this great man. Sachin Nagar, the illustrator, brought Gandhi's story to life through his masterful drawings while Quinn took the details of his life and summarized the important points down to manageable points.

I liked the book quite a lot. I am not a Gandhi scholar so I needed something introductory about the great Indian statesman. Starting at his birth and early years the reader travels with Gandhi to England for his legal training, to South Africa where he honed his message of peaceful resistance fighting for the rights of Indian nationals living there. And finally back to India where he succeeded in helping Indians gain independence from the British Empire.

The reader gains an appreciation that Gandhi was just a man with a lot of strength of conviction. He had an arranged marriage, but came to love and cherish his wife as a strong helpmate throughout their life together. One of his sons was estranged to him another died young. He grieved for his children. He stood up for the rights of those people with no rights which caused him to loose friends and very nearly his wife. He spent years in jail for his beliefs. He nearly died fasting for those beliefs, too. He was a man with a message, but he was just a man. He was killed after gaining independence for India when tension between Hindus and Muslims flared. His death, to some degree, helped cement his message in to the hearts of the people of the world. If only we would continue to follow his message today.

Not everyone loved likes this book as much as I do. One blogger, reporting on Goodreads said:


A book with a few emotional high points that is otherwise mediocre in every way. As a biography it does little besides chronicling event after event in Gandhi's life, adding no nuance or complexity to his character. As a graphic novel, it pushes no boundaries; it is full of art that is attractive but does nothing to distinguish the book.-Olag Kagan

Perhaps this reviewer knows more about Gandhi than I do but I thought the book was a good introduction to Gandhi and his life's message. The end of the book even has a very helpful timeline of his life events. In addition, there is another page of his famous quotes. I purchased this book for myself but now I will donate it to my library in hopes that several students will be motivated by Gandhi's message that one can make the world a better place.

Posted by Anne@HeadFullofBooks at 10:49 AM