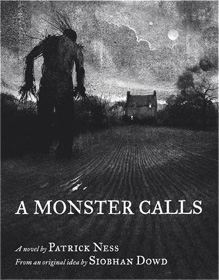 This book is so touching and thoughtful and deep and comforting and sad, I don't know how I will review it. Let me catch my breath while you begin by watching the book trailer which gives a good introduction to the book and sets the tone, as well.

I started this book last night thinking I would read a few pages just to get the writing style. 175 pages later I decided I'd best go to sleep and would need to finish it in the morning, which I did. A Monster Calls was selected as one of our 2012 Mock Printz books even though no one on the selection team had read it. The reviews we all so positive, how could we ignore them?

The cover says that Patrick Ness wrote this book but the idea came from the author Siobhan Dowd whose premature death from cancer in 2007 prevented her from writing the story herself. It is an extremely moving book about coming to terms with loss and grief. I admit it, I cried my way through the book and I am still feeling a bit tender and raw.  I could really feel Conor's pain and sorrow as he comes to grips with the realization that his mother might die from her illness.

There are lots of YA books about death and loss but nothing like this book. It hits right at the heart of the matter when it comes to grief and loss, these things that come like monsters into our lives when we lose a loved one.

The message in A Monster Calls is an important one.  Read it and you'll see what I mean, but grab a hankie before you start.

The monster showed up just after midnight. As they do.
But it isn't the monster Conor's been expecting. He's been expecting the one from his nightmare, the one he's had nearly every night since his mother started her treatments, the one with the darkness and the wind and the screaming...
The monster in his back garden, though, this monster is something different. Something ancient, something wild. And it wants the most dangerous thing of all from Conor.
It wants the truth. ----Patrick Ness, A Monster Calls

In case you were wondering, like I was, how Patrick Ness came to write a book where the idea came from another author, Siobhan Dowd, I found this article about it in the BBC Mobile News.  If possible his attitude toward the project and working from another author's ideas, makes me like the book even more.

Posted by Anne@HeadFullofBooks at 3:36 PM