Review: THE MOMENT OF LIFT 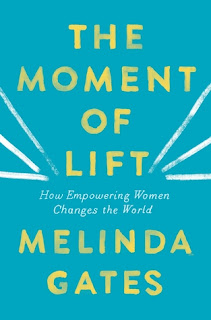 The Moment of Lift: How Empowering Women Changes the World by Melinda Gates is one of the most impactful books I've read in a long time. It was a book club selection, for which I am grateful, otherwise it is unlikely I would have selected it myself.  Melinda Gates, the author and soon-to-be x-spouse of Bill Gates, is the co-founder of the Bill and Melinda Gates Foundation dedicated to helping solve some of the world's biggest problems.

The moment of lift is defined as that moment in time when everything changes, like a rocket lifting off into outer space, being released from earth's gravity. In human terms Gates quotes a spiritual guide, Mark Nepo, who defines the moment of lift as a moment of grace when personal or cultural problems are "lifted  like a scarf in the wind" and one feels the freedom from whatever was dragging them down. The book, and her mission, is to highlight the actions of many people who are making a difference in the lives of women worldwide. These people have shown Gates what people can do to make an impact, to help others flourish.

The engines are igniting; the earth is shaking; we are rising. More than at any time in the past, we have the knowledge and energy and moral insight to crack the patterns of history...No one should be left out. Everyone should be brought in. Our call is to lift women up -- and when we come together in this cause, we are the lift (from the introduction).

The book is designed around eight areas of concern that can change the narrative for women: 1) Maternal and newborn health;  2) Family planning; 3) Girls in school; 4) Unpaid work; 5) Child Marriage; 6) Women in agriculture/gender equity issues; 7) Women in the workplace; 8) The lift of coming together. Each chapter is stuffed with examples of ways advocates can make and are making a huge impact in communities. Occasionally Gates would use her situation around parenting or workplace issues as examples to make her points and I generally found those to be the weakest points in the book because Gates is, after all, a billionaire. My favorite examples were the ones she shared where someone living and working in an area has hit upon a solution that works in her community.

As we discussed the book in our club one gal said she felt the book was tremendously repetitive. We all agreed on some level but pointed out that all the topics the book addresses are so tangled up together. For example, girls married off at young ages are less likely to complete any more schooling, are the most likely of any mother to experience labor and delivery problems. They are also the least likely to use any kind of birth control methods, often due to the power difference between themselves and their husbands. This power imbalance extends to other aspects of their lives, too, because they are deemed the bottom of most family power structures.

When Bill and Melinda Gates began their foundation someone was quoted as saying, "Oh here come the billionaires. Now the projects are sure to fail." They decided that they didn't just want to throw their money at projects without understanding the issues and how to make sure that their money was used to help effect change that lasted. This process can't be developed over night and isn't the same in every area. One advocate, Molly, helped Melinda Gates to understand the problem with the empathy barrier. People with good intentions swoop into areas to try to "fix" issues without taking the time to understand the culture and the past history. Molly has had success helping her community decide to stop conducting female circumcision operations through a series of community discussions which involved the imams. Once the community got a chance to discover on their own why they were doing this unnecessary operation on young girls (historical) and to learn about the benefits of not doing it, then the imams were able to spread the word to surrounding communities so a whole region could support one another in the stoppage.

Another area of high interest for my book club, since we are a church sponsored club, was the focus Gates brought to the role of religion in the treatment of women. "Disrespect for women grows when religions are dominated by men" (196). Here, Gates own religious faith came into focus for proof. Gates in a Catholic and she was very critical of how the church has only allowed men to become priests and hold all the higher offices. So when a topic like family planning comes up, a council of all men are the ones making decisions for women, without even any input from the gender most impacted by their decisions. She doesn't mention it, but think about what the Taliban is doing to women in Iraq again now that they are in power.

Here are the discussion questions, written by Gates herself, which we found helpful and useful in generating a very thoughtful exchange of ideas at our book club meeting. It isn't an easy book because the topics are so demanding and we probably should have attempted to divide up the book over several months of meetings so we could dig into each topic more thoroughly, but that is not our way. Nonetheless, I highly recommend this as a book club selection.

Posted by Anne@HeadFullofBooks at 12:59 PM