Review and quotes: WE BEGIN AT THE END 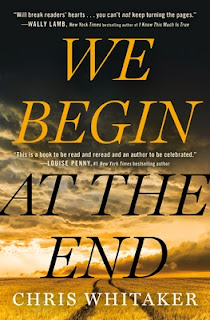 Title: We Begin At the End by Chris Whitaker

Walk stood at the edge of a feverish crowd, some he'd known since his birth, some since theirs.

There was much Walk wanted to ask about the last thirty years of his friend's life, but the scars on Vincent's wrists told him that time might well be worse than he ever could have imagined.

Summary: Set in a small town on the California coast author Chris Whitaker examines the ramifications of a deadly accident decades earlier when Vincent King was sent to prison for a hit-and run accident that killed Sissy Radley. Now 30-years later, Vincent is finally being released and his childhood friend Chief Walker, Walk for short, who happens to be the police chief of Cape Haven, hopes that the town and the family can finally begin to heal. But soon after Vincent's return home, Star Radley, Sissy's sister and one-time lover of Vincent, is shot and killed. Both Chief Walker and Duchess, Star's 13-year-old daughter and self-proclaimed outlaw, each launch investigations to uncover the truth. The novel is a murder mystery, a love story, and a coming-of-age tale with plenty of heartbreak and plot twists to keep the reader on the edge of their seat guessing right up until the end.

Review: I am a woman of two minds about We Begin At the End. First, I recognize that the plot has a lot going for it: two settings (California and Montana) which play prominently into the story line; sympathetic characters who are not easily pigeonholed; and a head-scratching who-dunnit. That said I just could not stop thinking about all the odd things that struck me as wrong about the story. The first, and maybe most obvious problem was an issue with California. In the very first paragraph a house is falling in the Pacific Ocean due to erosion, yet the rest of the story never mentions anything about the ocean, or the sand, or a beach, or the wind, or anything that would prominent in a coastal town. At one point Chief Walker mentions a family that moved "West." How can someone move west if they are already as west as you can be? Did they move into the ocean? Or to Hawaii? Even the name of the town, Cape Haven, struck me as wrong. I kept thinking of Cape Cod or someplace on the East Coast and wondered why that was. I finally looked it up and discovered my problem with the name -- Usually capes on the West Coast are called "points." Later I learned that Whitaker is from the U.K. so how would he know?

A few other issues grabbed me. In Montana, where the kids go to live after their Mother's murder, Duchess is allowed by an adult to walk in the swirling snow the mile up the driveway to the house in her party cloths. No way in hell would a Montanan adult let a kid walk that far in the snow not warmly dressed, especially since that adult was in a nice, warm car. And one more thing, Walk's mysterious illness, which kept him from being able to perform at peak levels, reminded me of the Bill Hodges in the third book of the Bill Hodges' series by Stephen King, but it wasn't handled as well. Sigh.

I could go on but I'll stop. Suffice it to say, I couldn't stop thinking of the problems with the story even as I was crying for the tragedy befalling the children in it. I don't ever remember feeling this way about a book before and I was sure I was alone in my thoughts until I read this review in the NYT. In it author Liz Moore takes issue with, among other things, the style of language that Whitaker chooses to use. She concludes with, "In the end, Whitaker’s prose — both within the context of his narration and within his characters’ forced-sounding dialogue — hampers what is otherwise a moving, propulsive story."

So there you have it. A review of a book with a great plot and a "propulsive story" but one that has problems which may nag at you as you read. If you have read the book, what are your thoughts about it? If not, have you ever read a book whose problems kept you from fully enjoying it? How did you cope? I hope to get a handle on my divided feelings before our book club meeting at the end of the month.