THIS IS YOUR TIME Ruby Bridges 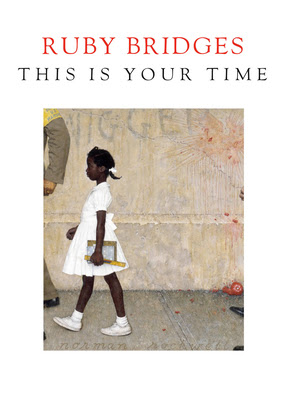 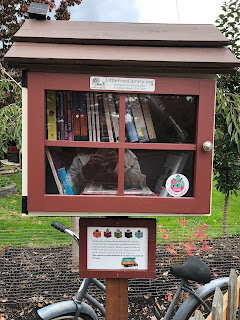 Our dryer isn't drying anymore. No big deal. We call a repairman who says he'll come and fix it in a few weeks. A few weeks? Well, maybe that is a big deal. In the meantime we have two loads of wet laundry and only liquid sunshine outside. Time to visit a laundromat. Now for some of you this is probably no big deal but for spoiled me it caused a mild panic attack, especially after I read a Yelp review of the closest laundromat: "Nice place as long as you ignore the Meth heads hanging around."  I talked my husband into going with me on the promise that we could walk the dog together as we waited for the clothes to dry. So we went with two laundry baskets full of wet clothes, our pockets full of quarters, and the dog all leashed up ready for a walk. Since the laundromat was in a neighboring town to ours we started off our walk, after stuffing the driers full of clothes and quarters, with an air of expectation. What did this new town have to offer us? We didn't get far before we found our first big surprise. (No it wasn't a Meth head!) It was a house covered with Black Lives Matter signs and messages and a small library on the corner of the lot. Inside was a message about how this library was intended to enhance cultural and racial understanding and equity issues. I was entranced. The note went on to say that any books not on these types of topics would be removed but users of the little library were welcome to donate other books on BLM, equity, social justice, anti-racism, etc. 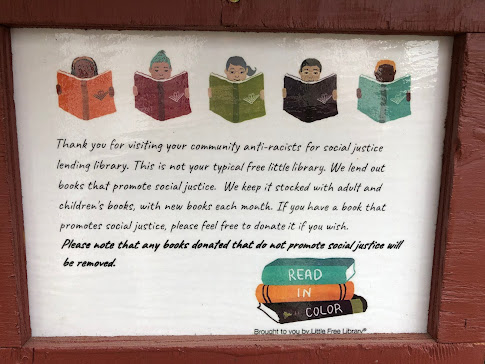 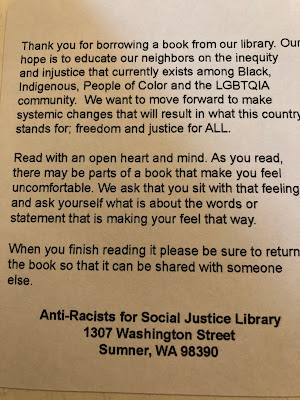 I borrowed a small children's book called This Is Your Time by Ruby Bridges. Inside the front cover was this sticker (see photo, left.) What a clever, affirming idea. To have a little library which is so cute and inviting, full of literature about social justice.

We all think we know a lot about Ruby Bridges, the brave little girl who helped desegregate schools in Louisiana when she was six, because the famous illustration of her done by Norman Rockwell. The hatred and vitriol that was thrown on this one little girl by grown adults is beyond awful. She had to escorted to school every day by federal marshals and she attended class alone every day, since all the white parents withdrew their children from school. What I didn't know before reading this book was Ruby and her teacher, Mrs. Henry, formed a bond during their year together.

"I felt safe and loved, and that was because of Mrs. Henry, who, by the way, looked exactly like the white women in that screaming mob outside. But she wasn't like them. She showed me her heart, and even at six years old, I knew she was different. Barbara Henry was white, I was black, and we mattered to each other. She became my best friend. I knew if I got past the angry mob outside and into my classroom, I was going to have a good day" (18).

There is a photo in the book of Ruby Bridges and Mrs. Henry when they reunited in 2014, 64 years after the year they spent together at William Frantz Elementary School in New Orleans.

Ruby Bridges words in This Is Your Time are a call for action today and a look back, accompanied by black and white photographs from back in the 1950s and 1960s, when her saga was first unfolding.

Today we have to go back and visit the laundromat again. The repairman came and was unable to repair our dryer without the required part. He put us off for another few weeks when he should be able to fix the dang thing. It is time for another walk as our clothes dry in the laundromat. This time when we pass the Anti-Racists for Social Justice library I will replace This Is Your Time, perhaps donating my Claudia Rankine book for the cause.