Review and quotes: THE PLOT 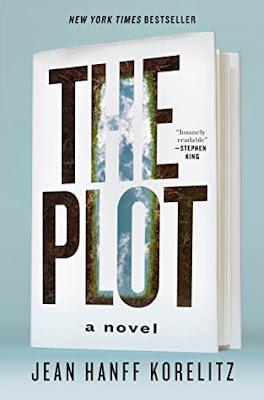 Friday56 quote (from page 21, the last chapter of the preview):

Summary: Jacob Finch Bonner was once an promising young novelist with his first published work gaining modest praise from reviewers.  After years of attempting to write a second or a third novel he is now teaching at a third-rate MFA program in Vermont and attempting to maintain a modicum of self-respect. During the required BBQ the night before the MFA seminar begins, Bonner runs into the most pompous person he has ever met and sure enough that person is part of his class. When Bonner attempts to help Eric Parker on his writing, Parker says he doesn't need help since he has a plot that won't miss and will surely break all kinds of publishing records. After Parker tells Bonner about his plot, Bonner agrees that it is a winning plot. Years later when Bonner learns that Parker died not long after leaving the MFA program, he decides to make that plot, his plot. The book indeed breaks all kinds of publishing records and the movie script is sold. Everything is going great until one day Bonner gets a message, "You've stolen the plot, and I know who it belongs to." Life takes a decidedly negative turn from there.

Hailed as breathtakingly suspenseful, Jean Hanff Korelitz's The Plot is a propulsive read about a story too good not to steal, and the writer who steals it. (Goodreads)

Review: My husband and I listened to most of The Plot during a recent car trip, getting home with about 20% left to go in the audiobook. Since we both liked the book well enough we decided to set aside some time later in the week to finish listening to it. At that point I honestly was a little underwhelmed, having heard so many great reviews about the book by you, my book blogging friends. The writing was good. The plot had taken a decidedly sinister turn and I was not quite sure which way it would go. But it didn't have the WOW factor I was expecting.

A week later, hubby and I were once again in the car together and decided to listen to a bit more of The Plot. We probably didn't have enough time to finish it but would make progress toward completion. That decision went out the window almost immediately as there was a huge plot twist which grabbed us and wouldn't let go. As we moved from the car to the house to finish listening my husband remarked he felt almost dirty, like he needed to take a shower, to get that twist off him! We finished the book in stunned silence. OMG, neither of us saw that ending coming.

Is The Plot my favorite book of 2021? No. Do I think you would enjoy it and should read it. Yes. But beware, it doesn't end as you think it will and that plot twist will likely catch you unaware, too.

Posted by Anne@HeadFullofBooks at 3:34 PM