Review--- Spooked: How a Radio Broadcast and The War of the Worlds Sparked the 1938 Invasion of America 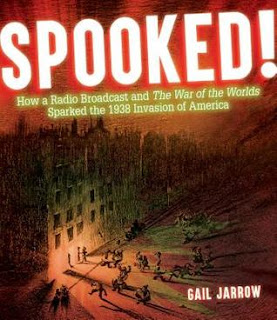 For as long as I can remember I've known about the infamous radio broadcast by Orson Wells, John Houseman, and others of H.G. Wells' book, The War of the Worlds. The radio broadcast supposedly sparked nationwide hysteria which led to deaths by heart attack and suicide. Though I've heard the lore about this event my whole life I've never actually read anything about it, nor have I listened to the actual radio broadcast. After reading Spooked: How a Radio Broadcast and The War of the Worlds Sparked the 1938 Invasion of America by Gail Jarrow all my long-held misconceptions have been cleared up.

Orson Wells and John Housemen were among other actors who got involved in radio programming. They created a weekly show called The Mercury Theatre on the Air which aired on Sunday nights. They would take a classic novel and would severely abridge it so that the whole book (plot) could be presented in a one-hour radio broadcast. Prior to The War of the Worlds the team, which included Howard Koch as the the script writer, performed A Tale of Two Cities and The Count of Monte Cristo. For their late October program the team decided to select a classic that might scare their listeners. They hit upon The War of the Worlds about an alien takeover of England. They decided to change the setting to New Jersey and update the plot a bit. Even as late as the dress rehearsal, Koch was making changes to the plot and it was decided to use "breaking news" blurbs to tell the story. This is what got listeners confused.

If a listener had been paying attention to the details parts of the story just didn't add up. The aliens landed in Grover's Mill, New Jersey and within minutes the whole US army was wiped out with only 200 survivors. Minutes later the aliens were in New York City wrecking havoc. The news reporter was remarkably able to travel the distances in the blink of an eye. At the end of the show, Wells announced that the whole program was a Halloween hoax. But by that time many people had panicked and stopped listening.

After the show aired, many listeners complained to CBS about the hoax and how they had been tricked and unnerved. Other listeners wrote to congratulate the network on the good fun. Just like today, news is often sensationalized and reports of the hysteria were exaggerated. And the myth persisted even after reports discredited the vast number of people who fell victim to the hoax.

At this point Jarrow speculates as to why Americans were so susceptible to the hoax in the first place. News of Hitler and the Nazi's actions in Europe were very worrying. Some people probably heard "alien" or "Martian" and transposed it into "German" or "Nazi" in their mind. The panic and reports of hysteria were very worrying because the world did seem to be on the brink of war and Americans seems to be wholly unprepared. Lastly, the broadcast brought to light how easily some people or a group of people could be brainwashed by this relatively new medium, the radio.

I've read several of Jarrow's other books, all targeting middle grade readers with high interest topics on the likes of Typhoid Mary and  bubonic plague in America. I find her writing clear and interesting and the books well appointed with appropriate photos and charts. They include timelines, indexes, lists of sources, and tables of contents. This book is not exception.

I am not sure that students today have heard about the 1938 invasion on America brought on by a spoofed radio broadcast of The War of the Worlds, nor read the original book. Nevertheless I think this book should be purchased by librarians for middle school and possibly high school libraries. It is useful to understanding how easily people can be tricked.

Posted by Anne@HeadFullofBooks at 5:15 PM