Listed in no particular order. 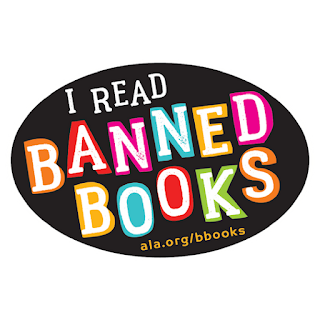 In case you didn't know, this week is Banned Books Week (September 23-29). We all need to be mindful of how damaging it can be to all books and authors if any books are banned. I make a point of reading a banned book every year at this time just to make a move for freedom.

This week I hope to read at least two books on the most frequently banned books of 2017 that I haven't read already. The possibilities are:  Drama by Raina Telgemeir; I am Jazz by Herthel and Jennings; Sex is a Funny Word by Silverberg. I will try to obtain them from the public library, which encourages libraries to purchase books on the banned list so more people will read them!

Join me? Select a banned book this week to read. Check out the links above for suggestions.  You'll be surprised how many of your favorite books are on the lists.