Review: Boots on the Ground: America's War in Vietnam 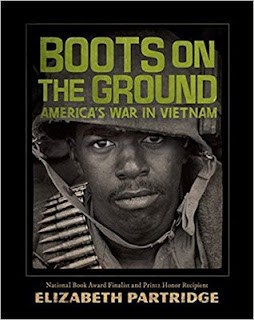 Boots on the Ground: America's War in Vietnam
by Elizabeth Partridge
Viking Press, 2018

I became aware of Elizabeth Partridge just recently when I went back and read her excellent Printz Honor book, John Lennon: All I Want is the Truth. I was heavy into my Beatlemania phase and went searching my own high school library for anything I hadn't read about the lads yet. I was very impressed by her writing and the way that she put the book together with timely placed photos and quotes. The book gave me a perspective on John Lennon I hadn't had before. When I noticed that Partridge was the author a new YA book about the Vietnam War, I was eager to get my hands on it.

Boots on the Ground: America's War in Vietnam is the best nonfiction book I've read about the Vietnam experience. It wins hands down. It is better than any adult books I've read on the topic for sure. Elizabeth Partridge interviewed eight veterans/people involved in the Vietnam War and then interspersed their stories with stories about what happening in the USA in the government and with the populace. In the epilogue, Partridge says this about the experience of interviewing these people,


"More that four decades have passed since the United States was defeated in Vietnam, yet the veterans I interviewed had vivid memories of their year 'in country.' sitting with me or talking on the phone recounting their experiences, they were flooded with turbulent, often contradictory feelings of fear, anger, sorrow, regret, and pride. Serving in Vietnam profoundly changed all of them."

The veterans' stories were shared in chronological order starting with Mike Horan who was a military adviser in Vietnam between May 1962 to June 1963. He was briefly captured by guerrilla fighters and thought he would be killed for sure. The next chapter is about John F. Kennedy was doing in November 1963 about the situation in Vietnam. We will never know if things would have been different with the war since that is the same month that Kennedy was killed. Each of the three US Presidents to serve during the Vietnam War got us more and more involved because no one wanted to be the first US President to lose a war.

A nurse working for the US Army, Lily Lee Adams, was one of the non-combatants to be interviewed for the book. She was profoundly and permanently affected by the horrors she witnessed first hand on the medical wards of the field hospitals where she served from October 1969 to October 1970. Hoa Thi Nguyen, a South Vietnamese national, also told her story. As an eighteen-year-old she and her family were forced to flee the country before the North Vietnamese overtook the country. Her father had helped the US military and would surely be killed if captured. Her remarkable and harrowing story of escape showed how profoundly civilians were impacted.

The part of the book that was new to me was the last few chapters where the development of the Vietnam War Memorial was explained. Jan Scuggs, who was an infantryman in Vietnam between April 1969 and April 1970. When he returned home he couldn't settle and tried to dull his pain with alcohol. One night after 1975 he awoke with a hangover but a clear vision of what he needed to do---he needed to help create a memorial to honor the thousands of soldiers who died needlessly in Vietnam. And that memorial had to have the name of every one of the dead engraved on it.


"It was a wild, grandiose plan. He wanted a memorial to be a place of remembrance, mourning, and celebration. The dead would have their names etched in granite, forever. The vets who'd come back struggling with their own anger, sorrow, and guilt would have a place to honor their fallen brothers. His memorial would even provide a place for reconciliation for the whole divided country" (177).

As we know, his dream became a reality but not before finding the architect to design it and to overcome the political and financial roadblocks. The architect chosen was Maya Lin, a senior architect student. Her simple design was selected anonymously. The black granite that was used was a big bone of contention with some vets who felt that the color was wrong somehow, but Lin, a second generation Chinese immigrant, stood her ground. It had to be black. Lin got a vision while visiting the National Mall during the time when she was designing her memorial concept,


"She started to imagine: What is war? What is death? She had a sudden impulse to make a cut into the earth, just take a knife and slice open the grassy surface, echoing the violence of war. She imagined polishing the dark earth until it was like a geode: shiny, black, and reflective. In the dark surface you would be able to see into infinity---the living on one side, the dead on the other...The ground, like a wound, would heal over in time" (180).

It was also Lin who insisted that the names be listed in casualty order "forever enshrined with the names of their buddies who were also mortally wounded that day" (182).

For four days in November 1982 America celebrated with a the national salute to Vietnam veterans by activities around the dedication of the wall. Scruggs was determined to throw the best celebration veterans could remember. Veterans arrived by car, bus, plane, and foot. They had been waiting a long time for some recognition. Many came to find their buddy's name, the guy who didn't make it home. Lily Lee Adams flew in from Hawaii for the dedication. She wanted to find the name of the helicopter pilot who had been so kind to her while 'in country'. "She touched the granite, trailed her fingertips over a few names, then a few more. So many, many names. Which of these men had she cared for" (190)? She ended up running along the wall trying to touch them all, "whether I took care of them or not." During the ceremony Lin stood back and watched the veterans' reactions to the wall. Their reactions took her by surprise. "She had tears in her eyes as she watched the veterans welcoming themselves home" (190).

I had tears in my eyes as I read this part of the book, too.

The cataloging notes inside the front cover say that this book is designed for 7th and 8th grade students but I think it is accessible for younger students, maybe 5th grade up and would certainly be interesting for high school students and adults. I highly recommend it. Now to obtain a copy: I had to request that my public library purchase it, and they did, but it wasn't on anyone's radar. When I searched for the book on Goodreads, Amazon, and the library catalog I had to input the whole title, with the subtitle, AND the author's name before I got a hit. Hmm...luckily I was diligent. The reward was reading this remarkable book. I urge you to do the same thing.

Posted by Anne@HeadFullofBooks at 4:59 PM