Review: Little Fires Everywhere--- a look at motherhood from many angles 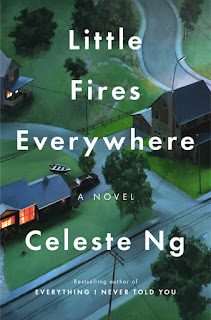 In Shaker Heights, a suburb of Cleveland, everything is planned right down to the allowable house designs and fines are handed out if lawns aren't cut. Elena Richardson grew up in Shaker Heights and she orders her life around the town and its rules. She is the mother of four teenagers. Elena prides herself on how her children are all turning out, well, all except the youngest, Izzy, who was born prematurely and seems to need the over-protection that Elena is required to give to keep her safe from her rebellious ways.

Enter Mia Warren and her teenage daughter, Pearl. Mia is a free soul who creates art and stays in a community only as long as her latest project requires, eventually pulling up stakes and moving to a new community somewhere else in the country. Mia and Pearl travel light. All they take with them from city to city is what they can cram into their car. When they arrive at their new home they scrounge around for cast-off furniture and household items. When Mia and Pearl arrive in Shaker Heights they find an apartment and rent it from Elena Richardson. All the Richardson children, especially Izzy, become friends with and intrigued by the Warrens--- befriending Pearl and enthralled by Mia. At one point several of the teens run across a photograph in a second-hand store. It is of Mia holding a baby. The photograph is clearly staged to make Mia and the baby to look like the Madonna and Child. This image is clearly symbolic of the way the Richardson children view Mia and Pearl's relationship.

To make ends meet, Mia works as both a waitress at a Chinese restaurant and as a housekeeper for the Richardsons. While working at the restaurant, Mia meets a Chinese immigrant, Bebe Chow, who has been abandoned in the USA by her Chinese boyfriend after she discovers her pregnancy. In an act of pure desperation, Bebe abandons her baby, Ma Ling, one cold night. She regrets her decision almost immediately but in the meantime the baby has been placed in foster care in the home of Linda McCullough, Elena's best friend.

By the time the McCulloughs are prepared to adopt the baby, now named Mirabella, Bebe attempts to get her back. The ensuing court case to determine who is the rightful mother pits Mia and Elena on opposite sides of the issue. Elena, now jealous of the attention her children are giving to the Warrens, does a little secret research and digs up a remarkable bit of information which will shed a negative light on Mia. Part of this information involves Mia's mother and a decision she made years ago which caused an irreparable fracture in their relationship.

In Little Fires Everywhere by Celeste Ng motherhood is explored from every angle. The fathers and men in the story are all just bit players. The stars of the show are the mothers and their relationships with their children. Elena Richardson wants her children to be perfect, just like Stepford Shaker Heights where they live---all ordered and rule abiding. When they aren't, she doesn't know how to react. Mia Warren allows her daughter lots of freedom but never tells her anything about her past, even about her father or her grandparents, as if the past has no importance for future generations.  Sometimes motherhood causes desperate people to make irrational decisions, as happened with Bebe Chow when she abandoned May Ling. For Linda McCullough, motherhood is the pinnacle achievement of her life. When she can't conceive on her own, she will transfer all her hopes and dreams onto an adoptive child, attempting to raise that child with no consideration to the child's culture of origin but loading on all the accouterments that money can buy.

And what of the "little fires everywhere?" Well, that is a nugget that is too good to give away. You will have to read the book to find out. But suffice it to say you may get the feeling like you, yes you, are implicated.

The book reviewer for the San Francisco Chronicle sums up the book this way,


“Ng has one-upped herself with her tremendous follow-up novel… a finely wrought meditation on the nature of motherhood, the dangers of privilege and a cautionary tale about how even the tiniest of secrets can rip families apart… Ng is a master at pushing us to look at our personal and societal flaws in the face and see them with new eyes… If Little Fires Everywhere doesn’t give you pause and help you think differently about humanity and this country’s current state of affairs, start over from the beginning and read the book again.”

That is quite a recommendation and I will jump in and second it. I consumed it in the the audio format, read by Jennifer Lim, and enjoyed it very much. Though it is really a drama, it reads like a thriller, with the plot unfolding at a very fast pace. So hold on to you horses. Little Fires Everywhere will give you quite a ride.