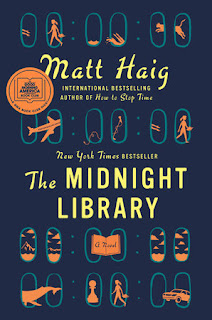 Twenty-seven hours before she decided to die, Nora Seed sat on her dilapidated sofa scrolling through other people's happy lives, waiting for something to happen. And then, out of nowhere, something did.

She knew only one thing with absolute certainty: She didn't want to reach tomorrow. She stood up. She found a pen and a piece of paper. It was, she decided, a very good time to die.

Summary: Nora's only living relative doesn't want anything to do with her. She just got fired from her job. And now she learns that her cat just died. Her life is full of regrets, decisions she made or didn't make that led her to this moment. She decides that life is not worth living and swallows a bunch of anti-depressants. But instead of waking up in heaven or hell or wherever one goes after death, she finds herself in the midnight library. In this library all the books, but one, are green and all of them are about Nora. If she had made one decision differently along the path of her life how would have things been different. Each book plays out a different iteration of her life based on her choices and decisions. The off-colored book, huge and weighty, is Nora's book of regrets. The midnight librarian is Mrs. Elm, or someone who looks just like her. She was Nora's school librarian who showed her a great kindness during a time of great need. Now Mrs. Elm is directing Nora to try a new variation on her life by picking up one of the millions of green books in the library.

Faced with the possibility of changing her life for a new one, following a different career, undoing old breakups, realizing her dreams of becoming a glaciologist; she must search within herself as she travels through the Midnight Library to decide what is truly fulfilling in life, and what makes it worth living in the first place. (from the publisher)

Review: I was very moved by The Midnight Library and about Nora's life, so stuck by her regrets. She clearly sees no value in her life and wants to die. But as she 'tries on' her other lives where different decisions were made she starts to get a feeling for how her presence in the world impacts others. In a very Jimmy Stewart/"It's a Wonderful Life" moment she realizes she has had a positive impact on others and for that she can find meaning in her root life.

This past Sunday my pastor preached on regrets and what we can do about them. I instantly started thinking about this book. As Nora went back and undid her regrets she often found the possibility that something unforeseen popped up, often just as bad or worse than what she had lived through before. Clearly one can not really go back and undo regrets so how can we live within them? Make sense of them?  Using biblical examples our pastor pointed out how some men, who were blameless in the eyes of God, still felt the need to atone for the sins (regrets) of the nation. The prophet Daniel is one example. He went to God in prayer asking for forgiveness for the actions of his nation. In Daniel 9:5 he prays: "“We have sinned and done wrong. We have been wicked and have rebelled; we have turned away from your commands and laws.” (v. 5-6) After the sermon, our pastor led us through a similar activity where we entered into a "Indigenous land acknowledgment" statement with the Puyallup Nation, the original people of the land where the church resides. We, the current people in our church, didn't take the land from the Puyallup people but we acknowledged that it happened. It was not just a token thing to do but a powerful event to participate in as we acknowledged what our forefathers did was wrong and how we want to move forward in a positive way into the future. It was a public way of asking for forgiveness.

By the end of The Midnight Library Nora embraces the life she has lived, her root life, and decides to make something positive of her life moving forward. She refuses to spend the rest of her life living in her regrets. I found that message, like the sermon on Sunday, to be very affirming.

A friend just messaged me and said she was waiting for this review before she decides if she wants to read this book for book club. There is no perfect book  and this one is no different. Though I enjoyed the book very much I need to mention one thing. Nora knows what she doesn't want but she doesn't know what she wants. That was a problem for her and probably for a lot of people. But because of this she is not a completely likable character. When she finally does come around I wanted to scream out, "Well, that took long enough!" That said, however, I do think the book would provide a lot of fodder for a great book club discussion and I liked it a lot.