Review and Quotes: FRED ROGERS---THE LAST INTERVIEW AND OTHER CONVERSATIONS 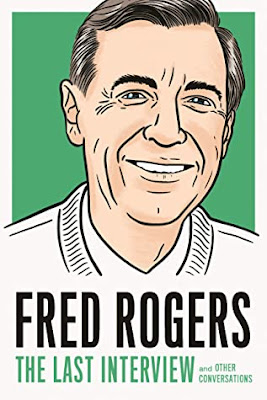 Title: Fred Rogers: The Last Interview and Other Conversations

Book Beginnings quote: From the Introduction by David Bianculli---

Fred Rogers.
Is there another name you could mention, especially in the field of popular entertainment in general and television in particular, so guaranteed to generate a wistful smile and a fond memory?

Friday56 quote: From "I've Got the Greatest Job in the World" interview with Karen Herman, pg 54---

Herman: What is television's responsibility to children?

Rogers: To give them everything that we possibly can to help them grow in healthy ways and help them to recognize that they can be angry and not have to hurt themselves or anyone else. That they can have the full range of feelings and express them in very healthy, positive ways.

Summary: This small gem is a collection of six interviews with Fred Rogers over the years, extending from the first before the Senate Subcommittee on Communications in 1969 to his last interview with Diane Rehm in 2002 before his death in 2003.

Review: I love Mr. Rogers so much and admire every aspect of his television "ministry." When my girls were little and while they watched the show I'd be sitting in the background weeping. Every message he shared with the children of his television audience was so precious and spot on. That is the way I felt about this book, a collection of his last interviews. I want to memorize everything that Mr. Rogers said and emulate him in everything I do. What a wonderful person.

I confess to laughing out loud as a tough Senator grills Rogers about the need for funds for public TV back in the late 1960s. After listening to Mr. Rogers' passionate words from one of his songs, Senator Pastore sighs and says, "Looks like you just earned the twenty million dollars. [Laughter and applause.]

What an inspiring collection of interviews and conversations.

Posted by Anne@HeadFullofBooks at 9:05 PM