My not very deep or insightful review of DUNE 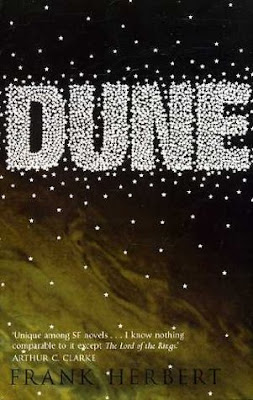 This year I am continuing a tradition started last year to select just one big book which I commit to finishing in the year. This year's book is DUNE by Frank Herbert and I have completed it. Readers and friends helped in the selection of my choice (both here and on Facebook) and more people voted for Dune than the other books. I did no research about the book other than to confirm that the author is indeed from the Tacoma-area, where I live.

To begin with I purchased both the e-book and the audiobook versions, fearing correctly that I would be flummoxed by the pronunciation of names and places in the fictitious world created by Herbert. Audiobooks help with that problem. Once the names and places become familiar I often like to switch back to the print version so I can read the book quicker. The audio version I purchased was 21+ hours long, so speeding up the process seemed like a good plan.

Secondly, before I got started, my daughter told me that she and her book club were reading Dune, but only book one. I thought I, too, was reading book one. But on closer inspection I discovered that the book indeed was actually three-books-in-one. I had read somewhere that the amazing thing about Dune was how groundbreaking it was at the time it was written, leading to many other books and movies, including 'Game of Thrones' and 'Star Wars'. Oh great. If I am reading a three-in-one book does that mean I am reading the equivalent of Star Wars: A New Hope/The Empire Strikes Back/The Return of the Jedi in one go? No wonder the blasted book is almost 900 pages long.

I was off to a very inauspicious start.

The story summary is pretty confusing. In a nutshell, there is a teenage boy, Paul Atreides, who moves with his family to Arrakis, which is a very dry and sandy planet, where his father, the Duke, is killed by a Baron. The rest of the book is about Paul's attempts to avenge this death and how he becomes a prophet/messiah-figure/hero along the way. And there is his mother who is very talented in her own rights and helps a lot, probably saving their lives more than once. Don't worry about this summary. Let me encourage you--- If you decide to read Dune, just read it. Don't worry about any summary. Just go with the flow.

As I said before, the author Frank Herbert was from Washington State, born in Tacoma. One summer  in 1957 he visited the Oregon Sand Dunes on the Oregon Coast near the town of Florence to conduct some research for an article that he never finished called "They Stopped the Moving Sands."  This visit to the sand dunes ignited his imagination and the idea for Dune was born. It took Herbert six years to write the book (or the three-in-one) and portions were published in the Analog magazine between 1963 and 1965. According to Shmoop, Herbert wanted his novel to be epic. "Why stop there? Why not make this beast of a book epically epic?" Which is a great quote if Herbert said it or not.

And Dune was epically epic. It won both the Hugo and the Nebula Awards in 1966. And it separates itself from most of the other Sci-Fi works out there. Herbert's imagination was on fire and the breadth and depth of it is on full display in Dune. There is the planet and its unique ecology, a host of characters with unique and often hard to pronounce names. This is what you expect. But there is also "politics, religion, philosophy, history, human evolution, and even poetry," all these things signified for Herbert the world of mankind. Each has its place in the Dune universe, and each plays a significant role in the destiny of humanity (Shmoop).

Since I am not a big reader of Sci-Fi some of the grandness of Herbert's world-building on Arrakis, in comparison to other books. was lost on me. The story often seemed even too big for itself. What I missed were the transitions. 'This or that' would be happening and then suddenly the story would shift, often after a long passage of time, to some other action or place and I'd think, "Hey, how did we get here? What just happened?" I even wondered to myself if Herbert's editor said that the book was too long and he needed to shave off a bunch of pages and Herbert decided to save time and effort by just taking out all the transitions. I doubt it, but whatever happened, I missed them.

Aside from missing transitions, unpronounceable names, and three books-in-one, I actually liked Dune, at least a little, and I thought the audiobook recording was well-done. Twenty-one hours seemed to zoom by as I listened.  I found myself cheering for Paul and hoping for his success at avenging his father's death and freeing the Fremin people from the tyranny of the empire. I was completely satisfied with the ending but apparently Herbert wasn't. He went on to write five sequels to Dune. When he died his son and a co-author carried on and wrote 20 more books. One could get completely lost in Dune forever.

Will I read on? No. Was I glad I read the book? Yes. Apparently Dune is one of those books, like Alice's Adventures in Wonderland and The Lord of the Rings trilogy, that people lie about reading. Ha! Well, I've never lied about it but I won't need to in the future either.

Posted by Anne@HeadFullofBooks at 3:19 PM