Review and quotes: THE EXILES 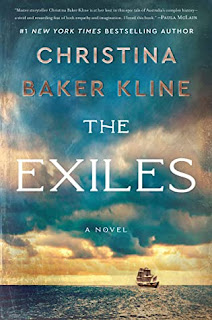 St. John's Wood, London, 1840: From within a restless dream Evangeline heard a knocking. She opened her eyes. Silence. There more insistent: rapraprap.

There is was: the ruby ring, sparkling in the glow of the whale-oil lamps in the gloomy drawing room. Mrs. Whitstone held it out like a treasure hunt find. "Where did you get this?"

Summary: Evangeline's father, a rector, has died. With no money or means she is forced to work as a governess for the Whitstone family. When she first arrives for her assignment, she meets and forms an attachment with the eldest Whistone son. In her naivety she becomes pregnant. Right before he leaves for a trip to Italy, the son gives Evangeline a family heirloom, a ruby ring, with a promise that when he returns there may be more to the relationship. But before he does return the pregnancy and the ring are discovered by Mrs. Whistone who has Evangeline arrested for theft. With no one to vouch for her Evangeline is left alone in the deplorable conditions in the prison and then she is sentenced to fourteen-years to be served in the penal colony, Australia. Aboard the prison ship, Evangeline makes a few friends: Hazel, a young girl from Scotland who was trained as a midwife by her mother; and Olive, a street-smart woman who is also pregnant. Both women deliver their babies aboard the ship with disastrous results. And this is only the beginning of their problems.

Review: One thing I like about reading historical fiction is learning new information about events or time periods. I enjoy gaining new insights about situations because they are presented with a story allowing dry, dusty history to come alive. That is the case with The Exiles by Christina Baker Kline. Evangeline, Hazel, and others had to endure such horrible conditions and a complete lack of justice because they were female and poor in the mid-1800s. Though I was aware of Australia being founded as a penal colony, I had never really thought about what happened to the prisoners once they got to Australia, or what they were required to do as part of their sentences. Now I know: work and work without pay. Hmm, sound familiar? There is also a side story about an aboriginal girl who is taken from her village and kept almost like she was part of a zoo exhibit. This is the second Baker Kline book that I've read. Both this one and Before We Were Yours pack an emotional punch but one that is followed up with a good moral lesson. The ending is very satisfying.

The Exiles is a book club selection for June. I imagine that we will have a fairly good discussion about the treatment of females throughout history. Our club usually picks four or five months worth of books at a time. The Exiles was the last of five books that we selected in January and all of them had something to do with the bad treatment of women in history or in a culture. It was bad timing on our part and now we are ready for a more lighthearted book or one that deals with men's problems. Ha! Any suggestions?

Posted by Anne@HeadFullofBooks at 7:18 PM