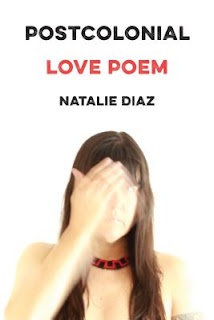 On the heels of a great National Poetry Month (April) for me I finished Postcolonial Love Poem by Natalie Diaz today and wanted to put together a review of my thoughts before they fade.

First I want to confess that I had an epiphany as I was hunkering down with a few of the poems attempting to figure out stuff about the poet through her poems without any context. Suddenly it dawned on me that I was trying to read this book of poems as if it were an autobiography of Natalie Diaz. I kept asking myself questions I couldn't answer---Does she have a brother who is mentally ill or is he dead? Does she have a broken heart from an estranged lesbian lover? Is she Latina or Native American? Then this thought snuck into my brain---The poems are meant to be read and treasured on a personal level. I didn't need to know the answers to my questions to enjoy the poems. And reading poetry isn't supposed to be like reading a novel or a biography.

But I did do a little research on Natalie Diaz. She is a member of the Gila River Indian Tribe (Mojave) and was born in Needles, California near the Arizona, Nevada, California line. Her father is Mexican and her mother is Native. So I now have at least one answer to my many questions. Of her work, National Academy of Poets Chancellor Dorianne Laux says,

“Natalie Diaz is a poet who calls out to us in so many ways, who reaches out to embrace her lover, her people, and her country. A speaker of Mojave, Spanish and English, she has developed a language all her own. She calls attention to language both in her poetry and in her efforts to preserve her native tongue through the Fort Mojave Language Recovery Program where she works with its last remaining speakers. Native language, she says, is the ‘foundation of the American poetic lexicon’ and believes it is an ‘important and dangerous time for language’. There is no better emissary for poetry and the cultures, values and history it embraces, as well as the beauty and power of the human voice” (Poets.org)

Language is clearly very important to Ms. Diaz, as is the environment and how humans are destroying wild places. She conveys a one-ness with aspects of nature throughout this poetry collection referring both to snakes and rivers as her sisters.  "The river is my sister--I am its daughter. / It is in my hands when I drink from it, / my own eye when I am weeping." She is sad at what has happened to her Colorado River because of so many dams on it. Clearly her frustration is at a boil when she ruminates, "You cannot drink poetry."

I was touched to the core by many of the poems, even if I am not quite  sure what they represent in Diaz's life. In the poem "It Was the Animals" she has an exchange with her brother who arrives with a plastic bag in which he believes he has a piece of the ark. "You mean Noah's ark? I asked. / What other ark is there? he answered." Later in the poem the brother chides her for not understanding, saying that all the books she reads won't help her. "He was wrong. I could take the ark... /  It was the animals---the animals I could not take-- / they came up the walkway into my house, / cracked the doorframe with their hooves and hips, / marched past me, into my kitchen, into my brother." Sometimes love means being willing to just accept a person, warts and all. And that love can save us both.

Loneliness is also a universal theme. In "If I Should Come Upon Your House Lonely in the West Texas Desert" I love the imagery of light juxtaposed to location: "I will swing my lasso of headlights / across your front porch, // let it drop like a rope of knotted light / at your feet. / While I put the car in park, / you will tie and tighten the loop // of light around your waist-- / and I will be there with the other end."

The title of Postcolonial Love Poem speaks volumes, too. Several poems speak to uncomfortable relationship that many experience living within a nation, within another nation. In one poem she explains that more Natives die at the hands of police, percentage-wise, than any other people in the USA. And in the poem "Minotaur,"  she lays it out. Can we get out of racist labyrinth in which we live?  "I have a name, yet no one who will say it not roughly. / I am your Native, / and this is my American labyrinth."

One interesting and fun aspect to Diaz's poetry is how she inserts phrases and words she has gleaned from elsewhere into them. In the notes at the back of the book she tells us where she found them and how the words or images she used inspired the poems. For example, the poem "Wolf OR-7" was built while she watched a few websites devoted to recording the movements of a male wolf who moved from Oregon into California. Another series of short poems/thoughts came to her after she read Luis Alberto Urrea's The Water Museum. I love the symmetry of this--an author, who is inspired to write a short story, passes on his inspiration to a poet who passes on her inspiration to me to be a better user of water.

I gained a lot of insight from the interview with Diaz by Sandeep Parmar, from The Guardian. If you want to know more about the poet and her works, I recommend that you read it.

I love it when I read something that opens my eyes to the experiences of people different then me. This is one of those books.

Posted by Anne@HeadFullofBooks at 4:43 PM