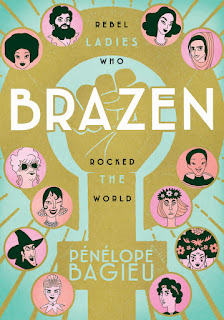 What do Temple Grandin, Wu Zetian, Nellie Bly, Hedy Lamarr, and Nzinga all have in common? You got it! They are all rebel ladies who rocked the world. 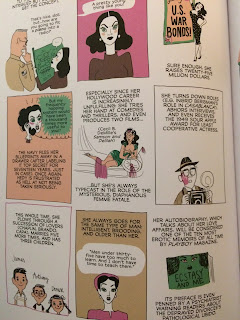 The lives of 29 women throughout the world and time are highlighted in this graphic collected biography. Many (most) of the women I'd never heard of before. Or in the case of a few, like Hedy Lamarr, I had heard of but didn't know much about. The format for the book is each woman is given a section with her accomplishments beautifully rendered in an easy to read graphic layout. Pictured is a page from Hedy Lamarr's section. I had known she was an actress, but I didn't know that she was an inventor. She invented the technology which led to GPS today, though she isn't often credited with it since the military filed her invention in a drawer for seventeen years before they did anything with it. Women can't invent something helpful, right?

None of the highlighted women led lives where their fame comes from being a sidekick to a famous man, like Martha Washington. These women all led lives in a brazen way, making a difference for those around them without being attached to a man. Wu Zetian, for example, ended up as the de facto ruler of China. She started out as a concubine but her child, a son, was the first born to the Emperor, which elevated her. When it came time for her son to rule, she started as the power behind the throne, eventually dropping the charade and ruling as herself. This all happened in the 600s AD. Another example, Nellie Bly who is now known for her style of investigative journalism, started off in the 1880s in a male-dominated career relegated to write about women's issues. She wanted more so she set about to create a new style of journalism we now know as investigated journalism. Just think about the world without this style of journalist. When she died in 1922 the newspaper reported it with a headline calling her "the best reporter in the world." Thank you, Nellie Bly.

Pénélope Bagieu is a graphic artist from France who has created several graphic novels before BRAZEN.   It was published in France in 2017 and then translated into English and published this year by 01: First Second of New York.

About this book Bagieu said,


"The lives of the women in Brazen moved me, gripped me, and fascinated me. This book is by no means a thorough scholarly work; rather it's one woman's tribute---my homage to the full, daring lives they lead, often against great odds. I hope these broad-stroke portraits will inspire you to further explore and research these remarkable human lives for yourself."

I loved this book. But I am not alone. It has received five starred reviews from professional reviewers like School Library Journal and Publisher's Weekly. It has earned 4.5 our of 5 points on both Goodreads and Amazon. Even beloved books don't get that high of scores on those sites. Baglieu has created a compelling work for readers with her art and highlighting both the good and bad aspects of each woman's life...making the book more authentic than those that only talk about the good things they did. I read it with a big smile on my face. I hope it gets wide readership among teens, it's target audience, though it may take talented librarians to make sure it gets in the hands of the readers. Hint-hint. Check it out from a library yourself and see if you don't agree with me. Or, better yet, buy it and read it to your girls or grandchildren. They need to hear the message over and over again. It is okay for women to be brazen!

With this review I have completed a personal challenge to finish writing sixteen past due reviews.

Posted by Anne@HeadFullofBooks at 10:16 AM