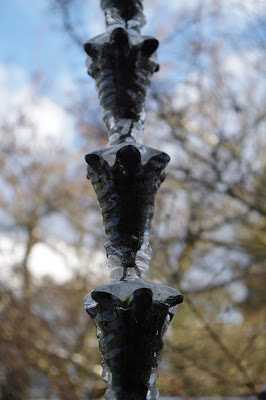 Weather: It snowed yesterday and it is still blanketing the ground since the temperatures are hovering below freezing. The photo is of our chain-bell down spout. The water in it froze overnight. Lovely, don't you think?

Politics: In light of the the thirteen indictments that were handed down to Russians/Russian companies and the school shooting in Florida that killed 17 people, this blog post will be dedicated to politics. We can no longer ignore what is going on. I urge you to click on the hyperlinks. Read up on these topics, and take action.


"This is code red. The biggest threat to the integrity of our democracy today is in the Oval Office" (NYT).

Guns. I am so upset about what happened in Florida this past week. Another shooter kills seventeen people at a high school with an assault rifle.


I don’t want your condolences you..., my friends and teachers were shot. Multiple of my fellow classmates are dead. Do something instead of sending prayers. Prayers won’t fix this. But gun control will prevent it from happening again.  https://t.co/UZPgcPoPUX— sarah (@chaddiedabaddie) February 14, 2018

Hypocrites and Evangelicals: A large percentage of evangelical Christians voted for Trump. They were willing to overlook his womanizing, his crass language, his sexual abuse, his lies, his bullying, and vote for him because he said he was against abortion. As a Christian myself, I do not understand the thinking behind this type of voter.


“The simplest explanation was that those evangelicals who voted for Trump had affinities with the Tea Party,” she writes. They seemed to care more about shrinking the government, creating jobs, and deporting illegal immigrants than about enforcing Christian morals.  (The Atlantic)

Other topics of grave concern:
Book: What Happened by Hillary Clinton (click the hyperlink for my review). Here are a few of my takeaways:

Thank you for putting up with me, on my birthday, as I vent and rant. I am seriously very concerned about my country. Very. Concerned.